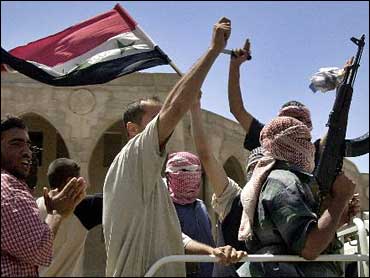 Gunmen waved their weapons in Fallujah's streets and outside car windows Saturday, celebrating what they called a victory as U.S. forces pulled back. But the Marines insisted they weren't going far and that a new Iraqi force taking the front line will root out die-hard insurgents.

The new "Fallujah Brigade," put together by Iraqi generals from Saddam Hussein's ousted regime, likely will include some former army soldiers who fought American forces over the past month, Marine Lt. Gen. James Conway conceded.
He promised, however, that anyone who has "blood on their hands" would not be allowed to stay in the force.

Another military official acknowledged that the United States didn't know who the individual members of the force were and that its fighters and commanders still had to be vetted to ensure that they are not connected to crimes of the Saddam regime. The force's leadership could be changed soon because of the screening process, the official said on condition of anonymity.

Scores of Iraqis gathered in the streets Saturday morning, some flashing "V" for victory signs and raising the Iraqi flag. Motorists drove through the streets, shouting "Islam, it's your day!" and "We redeem Islam with our blood!"

Some were masked with kuffeyahs and raised automatic weapons, like members of the insurgency that put up stiff resistance against the Marines. Some guerrillas drove through the city, honking horns and waving their guns out the windows.

Meanwhile, violence continued Saturday, exactly a year after President Bush stood aboard an aircraft carrier a declared that major combat in Iraq had ended.

A U.S. soldier was killed when a rocket-propelled grenade hit his convoy near the town of Qarraya, 45 miles south of Mosul, the military said. A second soldier died Saturday of wounds suffered the day before in a roadside bombing in the same area.