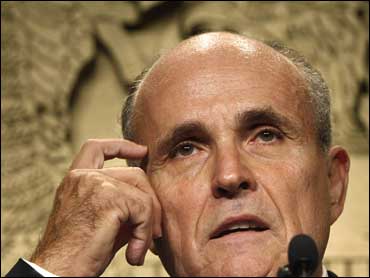 Are pigs flying? Is hell freezing over? Maybe not; but Rudy Giuliani - for the first time ever - did speak to the National Rifle Association today.

The Republican presidential candidate sought to reassure the NRA of his support for a constitutional right to bear arms, as rivals Fred Thompson and John McCain focused on the former New York mayor's past calls for tough gun control.

"I'd like us to respect each other; I think we have very, very legitimate and mostly similar views," Giuliani told NRA members who clapped politely a dozen times during his 20-minute speech.

The audience of about 500 people gave a warmer reception to Thompson, the former Tennessee senator who announced his campaign this month. Some stood and cheered as Thompson said: "Our basic rights come from God, not from government."

"I've never subscribed to the notion that we made our country safer by infringing on the Second Amendment rights of law-abiding citizens," Thompson said.

And he reminded the group he has supported them consistently since 1994, the year he was elected senator.

"It's not just a matter of promises made, as far as I'm concerned. It's a matter of commitments that have been kept," he said in a veiled swipe at Giuliani.

The candidates addressed the NRA event as gun violence occurred on a college campus. Two students were shot and wounded, one seriously, at Delaware State University, and the campus was locked down as police searched for a gunman, according to officials.

The Arizona senator also mentioned Giuliani's use of the word "extremists" in talking about the NRA.

"My friends, gun owners are not extremists; you are the core of modern America," McCain said. "The Second Amendment is unique in the world and at the core of our constitutional freedoms. It guarantees an individual right to keep and bear arms. To argue anything else is to reject the clear meaning of our founding fathers."

On the Second Amendment, Giuliani has said the right to bear arms applies to militias but also said recently that it applies to individuals.

As Mayor of New York in the 1990s, Giuliani's views were of a very different caliber: He stood with President Clinton to get a ban on assault weapons; said new federal laws were needed; he backed licensing for handguns; praised ex-President Bush for quitting the NRA; and assailed some of the organization's views.

He described the NRA as "extremists" in a 1995 interview with PBS' Charlie Rose: "The NRA, for some reason, I think goes way overboard. It's almost what the extremists on the other side do," Giuliani said.

Today, Giuliani was striking very different notes: "The time spent focusing on law-abiding legal gun owners is time taken away from arresting and prosecuting and disabling the criminals who use guns."

One of the odder moments in his talk came when he apparently took a cell phone call from his wife Judith. "I love you," he said at the podium.

NRA President Wayne LaPierre says the ex-mayor has some work to do in courting the gun rights movement. "How he deals with it will be very important to the 90 million citizens who own firearms that want this freedom defended," he said.

Giuliani's one-time ally in the gun control movement Paul Helmke, President & CEO of the Brady Campaign, said, "Rudy Giuliani I think really does want common sense gun laws," and is trying to sell that message to a critical audience.

On Friday Giuliani told the group: "You never get a candidate you agree with 100 percent - I'm not sure I even agree with myself 100 percent," he said, as some in the crowd chuckled. "You have to figure out who's electable, who can win. Because if we make a mistake about that, this country is going to go in a direction that I think you and I very much disagree with."

CBS News senior political correspondent Jeff Greenfield said that Giuliani might like the support of the NRA and its allies, but it's not critical that he get it. But in a Republican Party where four in ten are gun owners what is critical for Giuliani is that they do not see him as their enemy.