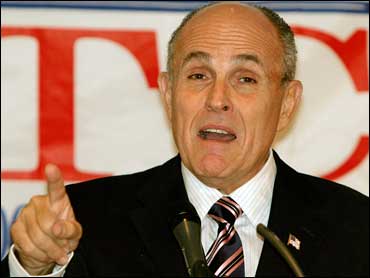 Republican presidential candidate Rudy Giuliani's top finance official is out in a staff shakeup just days before the fundraising deadline for the White House hopefuls.

Anne Dunsmore, deputy campaign manager for finance, has left the operation. Giuliani aides said the departure was unrelated to fundraising. The third-quarter deadline for all campaigns, Republican and Democrat, is Sunday.

"Anne Dunsmore is no longer working on our campaign. We thank Anne for her service and the departure is amicable," said Katie Levinson, communications director for the campaign.

Republican fundraiser Jim Lee will now serve as national co-chair and head the finance operation, with day-to-day responsibility for all fundraising operations.

In a statement, Dunsmore said: "I continue to believe Rudy Giuliani is the strongest candidate in the race and I strongly support him for president."

Giuliani was raising money Wednesday in New Jersey, attending a fundraiser for Somerset County Republicans and a house party where givers were being asked for $500 per person. Polls show Giuliani leading the Republican field in New Jersey.

Earlier in the day, Giuliani met privately Wednesday with Iraqi President Jalal Talabani and indicated that he would keep a U.S. presence in Iraq for as long as necessary, campaign aides said.

The former New York mayor is one of the few GOP candidates who has never been to Iraq. Talabani, in New York for the U.N. General Assembly, provided what Giuliani aides described as an optimistic report about progress in the region during the meeting.

Giuliani, in turn, emphasized his support for a unified Iraq and indicated that he would keep a U.S. presence in that country for as long as necessary, aides said.

The Republican front-runner in national polls has long backed the U.S.-led invasion in Iraq as well as this year's troop buildup. He often answers questions about the war by deferring to military commanders and has waded less into the specifics of how he would handle the conflict if he were to win the presidency.