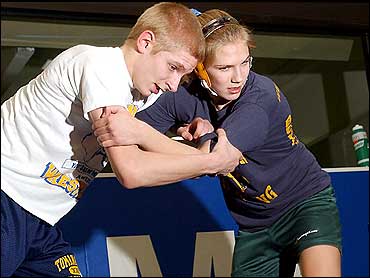 Wrestling at 103 pounds for Tomahawk High School, she is the first girl to qualify for the state high school individual tournament that starts Thursday in Madison.

Lampe is the only girl among 560 wrestlers competing in the tournament and is realistic of the daunting task she faces.

Winning one match would make her happy, and she probably can't win a Division 2 championship, she said, smiling before practice Tuesday. "But I am going to try to."

Already, her girlfriends are impressed.

"They think it is cool that I wrestle and beat up the guys," Lampe said. "I just think about myself as a normal wrestler."

Lampe posted a 32-10 record this season, including 12 pins and five forfeits, and qualified for the state tourney by placing third in the Amery sectional. She received a standing ovation from 2,000 spectators, Tomahawk High wrestling coach Kurt Weyers recalled.

Lampe started wrestling in kindergarten, has more than 500 matches under her belt and is "very, very strong," Weyers said.

"She does 50 push-ups a night, straight up," he said. "She is a huge weightlifter. She is probably the second strongest kid on our team.

"Her technique is awesome."

Add to that her 3.7 grade-point-average, some keen ability to absorb things "like a sponge" and a "very aggressive, in-your-face style," the coach said, and what you have is a very good wrestler.

If Lampe follows her dreams, the big stage of the state tournament is just a stepping stone. She hopes someday to compete in women's wrestling in the Olympics.

With no other hobbies — other than shopping — and no boyfriends, Lampe said wrestling is her passion.

"I just like working hard. This really sounds gross, but I like working up a sweat," said the teenager, her hair tied into a ponytail.

Teammate Josh Chelf, 18, qualified for his fourth straight tournament at 171 pounds and is undefeated at 38-0.

It seemed "a little weird" last year when Lampe joined the team, but she has earned Chelf's respect and praise, he said. "She is definitely not a girlie girl. You see her getting black eyes and bloody noses all the time. She doesn't really care. She kind of likes it, I think."

No exact figures were available but there were dozens of girls among the 7,200 high school wrestlers this season in Wisconsin, Clark said.

Two other girls reached WIAA sectionals — Amberlee Ebert of Reedsville and Aubrey Audetat of De Soto. Two girls have competed in the WIAA state team tournament, in which an entire team must qualify as a group.

Bruce Howard, a spokesman for the National High School Federation in Indianapolis, said 3,769 girls participated in high school wrestling in 34 states during the 2002-03 season, the most recent for which statistics were available.

"I would say that the number of those who advance to state tournaments is very small," he said.

Lampe began wrestling so her brother, Anthony, would have a practice partner and competed in her first tournament when she was 5. Her father was a high school wrestler in Tomahawk but never made the state tournament.

At Tuesday's practice, Anthony, the 16-year-old brother who wrestled at 112 pounds this season, was her opponent, butting heads with her as she lunged for his thighs, lifted him and tossed him to the mat, over and over.

Once, she crashed him on his shoulder. "I'm sorry," said the sister, smiling and tossing some hair out of her eyes.

Lampe is a tomboy, her brother said. And there might be a reason she doesn't have a boyfriend yet.

"They're afraid she's going to beat them up," he said, only half joking. "I am a little stronger than her, but she keeps up with me."