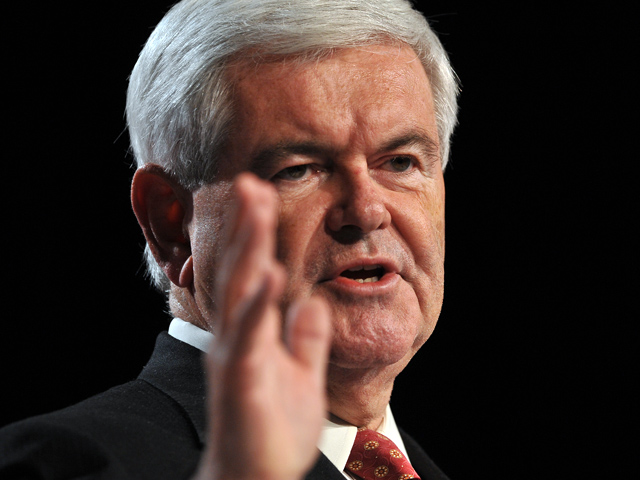 Appealing to conservatives wary of the court system, Republican presidential candidate Newt Gingrich on Friday not only called for reforming the judicial branch, but he also said he'd ignore the Supreme Court if he fundamentally disagreed with them.

"This modern model is just totally opposite the American tradition," Gingrich said of the judicial branch at the Values Voters Summit in Washington, a conference organized by the conservative Family Research Council Action.

Citing the precedent of actions past presidents took, Gingrich said he would ignore the courts if he had to.

"I would instruct the national security officials in a Gingrich administration to ignore the recent decisions of the Supreme Court on national security matters," he said, citing actions President Franklin Roosevelt took against German "saboteurs."

Just as President Abraham Lincoln was inspired to act against the Dred Scott decision, Gingrich said, "one of the major reasons I am running" for president is the Ninth Circuit Court of Appeals' 2002 ruling that the phrase "one nation under God" in the Pledge of Allegiance was unconstitutional. The ruling was later overturned.

Gingrich slammed a handful of cases he considered judicial overreach, such as the California Proposition 8 ruling, which he said amounted to "one judge in California deciding he knows more than 8 million Californians about the definition of marriage." He called out a U.S. District judge who this year banned formal prayers at a San Antonio high school graduation, saying Congress should hold hearings on the matter.

"On the issue of God and American public life, the courts have been historically wrong at least since the 1940s," Gingrich said.

In his "21st Century Contract with America," one of Gingrich's campaign promises is to "restore the proper role of the judicial branch."

The conservative audience at the conference had a positive response to Gringrich's largely academic speech, but his reception paled in comparison to that for competitor Herman Cain, who spoke before Gingrich.