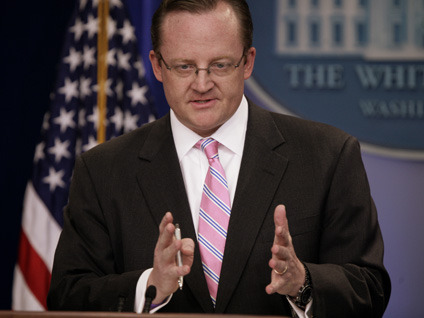 For the first time since Tuesday's elections, White House Press Secretary Robert Gibbs went on the record about the results.

He was asked about the results of the special election in Pennsylvania's 12th congressional district - won by Democrat Mark Critz over Republican Tim Burns.

Critz was sworn-in today and Gibbs as asked about what kind of democrat Critz would be in congress, as he is anti-abortion rights, pro-gun rights, and campaigns against the president's signature achievement, health care reform.

"I doubt there are many in Congress that agree with each and everything that the president agrees on. We have the luxury of enjoying a party with a big tent.... there are common values that we enjoy as members of the same party," he said.

Gibbs then addressed the Republican party's move to the right and the loss in Sen. Arlen Specter (D-Pa.)'s bid for the Democratic nomination:

"I think if you look at the events that have transpired in the republican party over the last, let's go back 13 months, Arlen Specter was running in a Democratic primary largely because he was run out of his own party... Charlie Crist (governor of Florida) went from 18 months ago being on the very short list of a Republican vice president to being run out of his own party... I think if you look at the direction that both parties are going, we are happy to enjoy a large tent with common values, but diverse viewpoints. I think the Republican party is having an internal battle with themselves and they are shrinking the size of their party."

Earlier, Gibbs was asked if the White House was concerned that the president has not supported a winning candidate during any election in his time in office, with his endorsed candidates going 0-4 in elections.

A flat "NO" was his response.

For those playing at home, those 4 candidates are Creigh Deeds for Virginia governor, Jon Corzine for New Jersey governor, Martha Coakley for Massachusetts Senate and Specter.

O'Rourke to Abbott at Uvalde presser: "You are doing nothing"
Robert Hendin