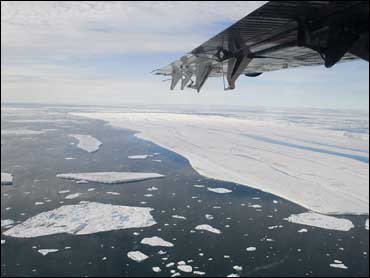 A chunk of ice spreading across seven square miles has broken off a Canadian ice shelf in the Arctic, scientists said Tuesday.

Derek Mueller, a research at Trent University, was careful not to blame global warming, but said the event was consistent with the theory that the current Arctic climate isn't rebuilding ice sheets.

"We're in a different climate now," he said. "It's not conducive to regrowing them. It's a one-way process."

Mueller said the sheet broke away last week from the Ward Hunt Ice Shelf off the north coast of Ellesmere Island in Canada's far north. He said a crack in the shelf was first spotted in 2002 and a survey this spring found a network of fissures.

The sheet is the biggest piece shed by one of Canada's six ice shelves since the Ayles shelf broke loose in 2005 from the coast of Ellesmere, about 500 miles from the North Pole.

Formed by accumulating snow and freezing meltwater, ice shelves are large platforms of thick, ancient sea ice that float on the ocean's surface. Ellesmere Island was once entirely ringed by a single enormous ice shelf that broke up in the early 1900s.

At 170 square miles and 130-feet thick, the Ward Hunt shelf is the largest of those remnants. Mueller said it has been steadily declining since the 1930s.

Gary Stern, co-leader of an international research program on sea ice, said it's the same story all around the Arctic.

Speaking from the Coast Guard icebreaker Amundsen in Canada's north, Stern said He hadn't seen any ice in weeks. Plans to set up an ice camp last February had to be abandoned when usually dependable ice didn't form for the second year in a row, he said.

"Nobody on the ship is surprised anymore," Stern said. "We've been trying to get the word out for the longest time now that things are happening fast and they're going to continue to happen fast."