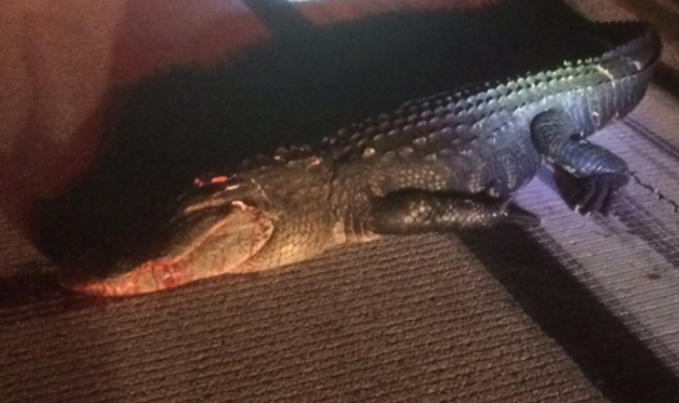 ORLANDO, Fla. - What should have been a smooth landing turned scaly when a pilot at Orlando Executive Airport hit an 11-foot, 500 pound alligator that was crossing the runway, reports CBS Orlando affiliate WKMG-TV.

Local pilot Brad Pierce posted a photo on Facebook Tuesday showing the lifeless reptile and explaining the information he was given about the incident.

"I was told the pilot was flying a Navajo and the gator jumped up and struck the wing during his landing. The gator was killed instantly and the aircraft sustained damage to the wing," Pierce wrote.

The Greater Orlando Aviation Authority said a Piper PA 31 was landing around 2:15 a.m. on Thursday when the plane fatally struck the reptile. The gator was killed on impact. The pilot wasn't injured but the aircraft did sustain some damage.

Traffic at the airport wasn't impacted after the collision or when a trapper removed the animal.

Four total plane versus alligator collisions have been reported at OIA since 1998, the FAA says.

The agency has no record of any prior alligator strikes at Orlando Executive Airport.

A total of 147 animals have been struck at Orlando Executive Airport since 1990, the vast majority of which were birds, including owls, hawks and one bald eagle.