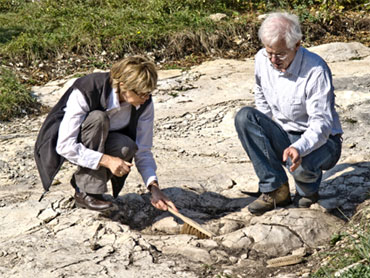 Paleontologists in eastern France have reported the discovery of some of the largest dinosaur footprints ever documented, measuring about 4.6 feet to 4.9 feet in diameter.

The site of the find, high in the Jura mountains, was once a literal sauropod stomping ground: So far, 20 prints scattered on a 25-acre site have been uncovered, paleontologist Jean-Michel Mazin of France's National Center of Scientific Research told The Associated Press on Wednesday.

Researchers believe there are hundreds, or even thousands, more still hidden, Mazin said.

The well-preserved footprints from the Late Jurassic period will help scientists learn more about sauropods, long-necked plant eaters that were giants among the dinosaurs. The hulking beasts who left their footprints in the mud 150 million years ago weighed 33 to 44 tons and were more than 82 feet long, the French research center said.

From the prints, "we can calculate their size and speed, find out about their behavior and learn how they got around," said Mazin, who is studying the site along with fellow researcher Pierre Hantzpergue. Their discovery was announced Tuesday.

Several scientists who are not connected with the project said the prints appeared to be among the biggest ever found internationally, though they noted that slightly larger tracks have been recorded elsewhere.

Andrew Milner, paleontologist at the St. George Dinosaur Discovery Site at Johnson Farm in southwestern Utah, looked at photos of the French craters and said, "You get a real sense of the weight of the animals, you can see a big, clear mud ring around the footprints."

"It looks like a pretty amazing site - I'm blown away," Milner added. Daniel Marty, a paleontologist who is excavating dino tracks along a highway under construction in Switzerland, said the French site is "very interesting, there is this huge potential for excavation."

Two eagle-eyed nature lovers, Marie-Helene Marcaud and Patrice Landry, discovered the site on a path through a mountain prairie and reported it to scientists. Hikers often passed by, but nobody had reported dino prints before.

"They were very hard to see because there were a lot of little stones (on the ground), there was grass growing there, and you really had to have a trained eye to notice something," said Mazin, the French researcher.

The Jura mountains gave the Jurassic period their name because rocks from the period were found there. Back then, the area resembled the Bahamas, all water and islands.

Mazin said the dinosaurs are believed to have left their tracks in the mud, which then dried in the sun, and were then covered up by sea and sediment, safeguarding the prints through history.