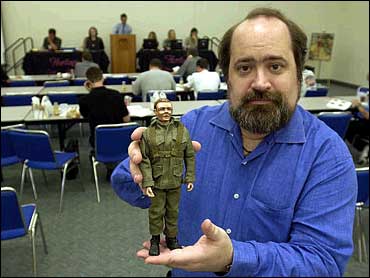 His face may be battle-weary, but the 1963 G.I. Joe prototype is no longer an auction-block refugee, an auction house said Thursday.

The handmade 11 1/2-inch figure ended up capturing $200,000 in a private sale to comic book distributor Stephen Geppi, despite Joe's failure to bring a minimum $250,000 bid at auction last month.

"When this thing didn't sell at auction, I got another bite at the apple, and I thought: 'My God. I can't believe this. This is like a precious item,"' Geppi said in a Thursday interview.

But at $200,000, the comic book tycoon said he was thrilled to acquire the one-of-a-kind item.

"I remember playing with G.I. Joe when I was a kid, and who'd have thought some 40 years later I'd would be buying the actual prototype for this action figure," he said. "It's just a great coup for me."

John Petty, of Dallas-based Heritage Comics Auctions, which handled the sale, said the prototype was "the most valuable action figure ever sold."

Geppi, 53, bought the G.I. Joe figure from Don Levine, a Korean War veteran and former Hasbro executive involved in the toy's creation. Hasbro set out 40 years ago to develop a toy that would do for boys what rival Mattel's Barbie had done for girls five years earlier.

The figure wears a hand-stitched sergeant's uniform and has a hand-painted, battle-weary expression. Its name was inspired by the 1945 movie "Story of G.I. Joe," starring Robert Mitchum.

For decades, the prototype spent its days in a cardboard box at Levine's Rhode Island home.

Geppi, who owns Diamond Comic Distributors, of Timonium, Md., and is a part owner of the Baltimore Orioles, said he plans to make the figure very visible to celebrate its 40th anniversary next year.

"This is a piece of Americana that belongs in a museum," he said.