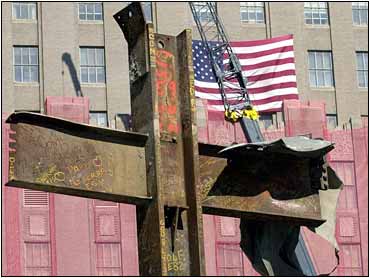 A Georgia company is selling commemorative medallions made with recycled steel from the World Trade Center, angering some relatives of September 11th victims who call them "ghoulish souvenirs."

"I think it's disturbing. They're profiting off our losses," Marian Fontana said Wednesday. Fontana, president of the Sept. 11 Widows' and Victims' Families Association, lost her firefighter husband, Dave Fontana.

The medallions are forged from an alloy, 25 percent of which is recycled trade center steel. They are offered on the Internet and at collectibles stores for $29.95.

About 60,000 tons of the steel from the trade center have been cut into manageable pieces and shipped to recyclers around the world. International Agile Manufacturing, a foundry in Statesboro, Ga., purchased some of the steel from a New Jersey salvage yard and is producing the medallions.

Alfonzo Hall, the company's president and chief executive officer, said it is a "slap in the face" that his company and workers are being called insensitive.

"We believe we came up with something that commemorates the event," Hall said. "If anyone anywhere in the United States could tell me a better way to use the steel and have 100 percent agreement among all, we would do that."

Ten percent of the medallion profits will go to charities, but the company has yet to decide which organizations it will benefit, Hall said.

The company also pledged to set aside 5,000 to 10,000 of the 1-pound medallions for victims' families at no charge.

"We felt it was necessary to do something very tasteful where people all over the United States who have never been to New York could feel a part of the event," Hall said.

"God Bless America" is written across the top of the medallions; "United We Stand. September 11, 2001" is across the bottom. An U.S. flag is depicted in the middle, behind a rendering of the New York City skyline, including the World Trade Center's twin towers.

A woman who answered the phone Wednesday at Metal Management Northeast in Newark, N.J., said the company had no comment on the sale of the steel to Agile Manufacturing.

Sally Regenhard, whose firefighter son Christian Regenhard was killed on Sept. 11, said she was "shocked and outraged" when she heard about the medallions, which she called "ghoulish souvenirs."

"The last thing I need to look at is a memento that represents the building that killed my son," she said.

Regenhard said a federal investigation into why the buildings collapsed should include a through examination of the steel beams before they are recycled.