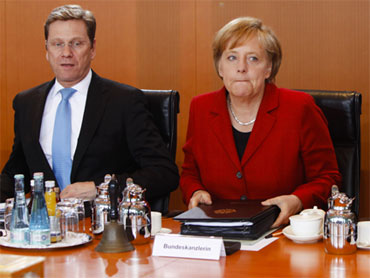 Speaking to reporters in the German capital, Merkel said Monday the money would do more than just assist Greece. She said it will help the "stabilization of the euro as a whole and, therefore, help the people of Germany."

The remark was a nod to the popular discontent in Europe's biggest economy about having to pay so much to help a fellow European Union country that many Germans feel has been fast and loose with its finances for years.

Merkel's Cabinet approved legislation Monday to give Greece billions in aid as part of an EU bailout, an official said, as Germany slowly realized that letting Greece go bankrupt would send the euro into a tailspin and hurt its own economy.

Both moves were mandatory after European governments and the International Monetary Fund agreed Sunday to give €110 billion ($145 billion) in loans to Greece over three years. The loans came after Athens adopted a new round of austerity measures that provoked uproar among Greek workers.

IMF officials say Greece could start receiving money from the rescue package in about a week.

Germany will contribute €8.4 billion ($11.14 billion) for the first year of the bailout. The official, speaking on condition of anonymity because the formal announcement was to be made later Monday, told The Associated Press that the Cabinet approved the plan but gave no further details.

The draft law now needs to pass both houses of parliament. Merkel has fast-tracked it, hoping to have it approved this week, and all major opposition parties have pledged not to block it.

"This is the only way for us to return the euro to stability," Merkel said of the Greek bailout. "It is a sustainable program, spread out over many years."

Germany, Europe's largest economy and European Union founding member, had insisted on the strict austerity package before it would move to free up aid.

Merkel has been worried about the impact of the bailout on her party at a key state election Sunday. Many Germans are angry that their tax money is being used to bail out a fellow EU member they feel has been dishonest in its accounting and profligate in its spending - while Germany itself has undergone years of budget-tightening to stimulate its economy.

"This is just the tip of the iceberg and I am afraid of it," Werner Selmer told AP Television News at Berlin's main train station. "Is this necessary? Should we do this? I think yes, my feeling is yes, but I have a bad feeling, a very bad feeling."

About 1,000 garbage collectors and other striking municipal workers marched to the Greek parliament on Monday, chanting "trash for parliament, not the landfill!" 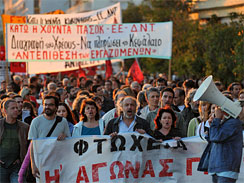 (AP Photo/Nikolas Giakoumidis)
"This is a chance for a fresh start," Papandreou said. "We are making changes that should have happened years ago."

(Left: Demonstrators protest against new economic measures during a rally in Thessaloniki, Greece on Sunday. The Greek government has outlined harsh spending cuts and tax increases for the debt-ridden country.)

Italian Foreign Minister Franco Frattini in Rome criticized Berlin for dragging its feet, saying the EU action on Sunday was "important even though it was late."

"The later you intervene, the worse it gets." Frattini said noting that the initially figure mentioned was "€50 billion - 10 days later we decided on euro110 billion."

The ECB, the central bank for the 16 nations that use the euro, said Monday it was suspending the minimum credit rating requirement for Greece, including all existing and new debt instruments "issued or guaranteed by the Greek government."

The decision by the Frankfurt-based bank ensures that Greek debt can be used as collateral in ECB lending operations, despite its credit ratings. Greece's financial disarray was amplified last week when Standard & Poor's cut Greece's rating to junk status.

"Clearly, desperate times call for desperate actions, and today's ECB decision is one step in the right direction," analysts with the Royal Bank of Scotland wrote in a research note.

In Paris, French Finance Minister Christine Lagarde defended the package, telling Europe-1 radio the bailout is "not a donation, it is not a subsidy" but a loan to push Greece to clean up its public finances. She is going to the lower house of parliament later Monday to present a budget amendment allowing the government to release French aid funds for Greece.

Greek labor unions, upset over a new round of spending cuts, were planning a general strike Wednesday.

"These cuts will kill our income. Pensions in Greece are already very low," said Dimos Koumbouris, head of a pensioners' association, told the AP.

He feared that the austerity measures, which will cut back on holiday bonuses paid to public servants and pensioners, will force them to curtail their spending.

"Many retired people wait for their holiday bonuses to buy clothes, and even extra food," he said. "How will these people get by now?"

The Athens Stock Exchange opened up on the news of the loan agreement, before dropping back 1.24 percent to 1,846. Spreads on Greek bonds were down to 574 from above 600 in the morning.