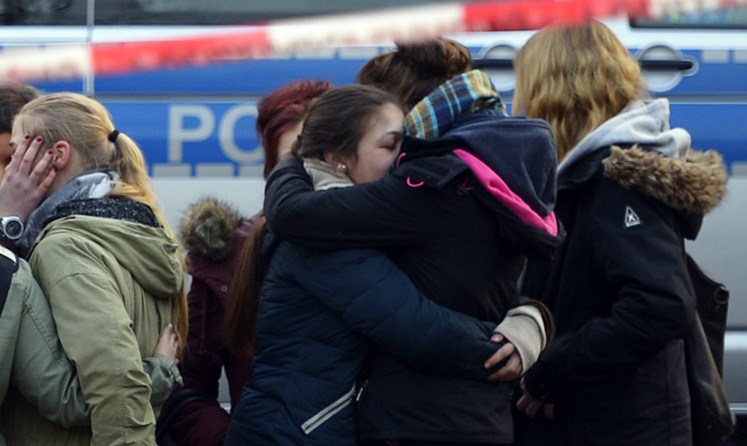 HALTERN, Germany -- A stunned German town mourned 16 students who went down aboard Germanwings Flight 9525 on their way home Tuesday from a Spanish exchange, while the opera world grieved for two singers who were returning from performing in Barcelona - one of them with her baby.

"This is surely the blackest day in the history of our town," a visibly shaken Mayor Bodo Klimpel said after the western town of Haltern was shocked by news that 16 students from the local high school and two of their teachers had been on the plane. They had just spent a week in Spain.

Some hugged and cried in front of the Joseph Koenig High School, where the 10th graders had studied, and put candles on its steps. Others changed their Facebook cover photos to black, with the simple message "Haltern mourns; In memory of the victims of the March 24, 2015 plane crash."

"You can feel a state of shock everywhere," Klimpel said at a hastily called press conference at city hall. "This is pretty much the worst thing you can imagine."

The town of 38,000 lies about 50 miles northeast of the plane's destination of Duesseldorf.

"It was a Spanish language exchange program and they were flying home after having what was probably the most wonderful time of their lives," local education minister Sylvia Loehrmann told Reuters.

Officials confirmed that the school group was among the 150 people on board the plane. The victims are believed to have included a total of 67 Germans, including an opera singer; many Spaniards; business travelers en route to a trade fair in Cologne and one person from the Netherlands.

The German students and their teachers spent a week in Llinars del Valles and were seen off at the town's train station for their early morning trip to the airport by their Spanish host families, said Pere Grive, the deputy mayor of the town of 9,000 about a 45-minute drive from Barcelona.

"We are completely shattered and the students are also devastated," Grive told The Associated Press.

In Haltern, the high school was going to be kept open Wednesday but no classes were planned.

"There will be an opportunity for the students to talk about the terrible event," Klimpel said.

Also among the passengers were two German singers who had been in Barcelona to perform in Richard Wagner's "Siegfried" at the city's Gran Teatre del Liceu - bass baritone Oleg Bryjak, a member since 1996 of the ensemble at Duesseldorf's Deutsche Oper am Rhein opera house, and Duesseldorf-born contralto Maria Radner.

"We have lost a great performer and a great person in Oleg Bryjak. We are stunned," said Christoph Meyer, director of Deutsche Oper am Rhein.

Radner took the Germanwings flight with her husband and baby, Liceu director of communications Joan Corbera said. He added that the theater's employees will hold two minutes of silence on Wednesday in the singers' honor.

Meanwhile, the mayor of the small Spanish town of Jaca in the Pyrenees mountains said that a woman originally from the town died in the crash along with her baby boy. Jaca Mayor Victor Barrio said Marina Bandres, who lived in Britain, had been attending a funeral in Jaca for a relative and was taken to the Barcelona airport by her father. Barrio did not know if her husband was on the flight with her and the boy, Julian.

Spanish authorities were still trying to determine how many of their citizens were on board.

Business travelers included Carles Milla, the managing director for a small Spanish food machinery company, his office said, adding that he had been on his way to a food technology fair in Cologne. Two employees of Barcelona's trade fair organization were also on the flight.

At Barcelona airport, where the plane began its journey, psychologists helped grieving relatives who were quickly escorted to a secure area.

Catalonia's regional leader, Artur Mas, said the government would arrange transportation for families who want to view the crash site but did not say when the visit would take place.

"The people were standing at the same place where we're standing now ... now they're not there anymore. So it's a strange feeling, a really strange feeling," he said. "I feel sorry for everybody in Germany. All the people there who have lost some family members."