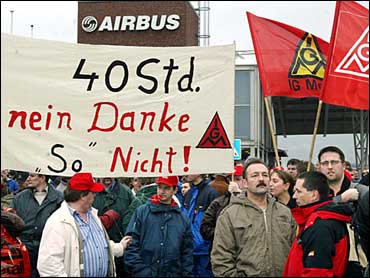 The 220 technicians at a Siemens phone repair lab in Germany faced a choice: work five hours more a week for the same pay - or don't work at all.

They found there wasn't much to decide.

By giving up their 35-hour week, won by German industrial workers in a seven-week strike 20 years ago, the employees kept their jobs from heading to low-wage Hungary. They also won a no-layoff pledge from Siemens.

Longer work weeks are a possibility increasingly faced by German workers as industry, under pressure from cheaper wages abroad and a sluggish economy at home, tries to cut soaring labor costs.

"The question was simply this - either make 220 people unemployed or accept these drawbacks," said Michael Stahl, head of the employee council at the plant in the northern town of Bocholt.

"And after going back and talking with the workers, we decided together to accept these disadvantages."

With millions of cheaper and often highly skilled workers in former communist countries just to the east and Germany's jobless rate at 10.7 percent, at least some workers on Germany's factory floors appear ready to compromise.

Siemens is one of several major German companies talking to workers in select departments about longer hours. Automaker DaimlerChrysler, tire company Continental and auto supplier Robert Bosch are others.

In most cases, talks are still under way and the companies are reluctant to discuss them before they get a deal.

Siemens and its chief executive, Heinrich von Pierer, drew sharp criticism from leaders of the IG Metall industrial union, which represents some 2.5 million workers in manufacturing and electronics.

But even IG Metall agreed to increase the limited use of 40-hour weeks for some workers in a new agreement with major industrial employers this year - though employees would get paid for those extra hours, just not at overtime rates.

Under the contract, workers can agree at the company level to work longer to save jobs, but union higher-ups must endorse the decision.

On their own, workers and management can also agree on 40-hour weeks for limited numbers of highly paid, white-collar research and development workers.

Siemens' von Pierer says longer hours aren't a solution for all 170,000 of its workers in Germany, out of 417,000 worldwide. But he says some places, such as Bocholt and a nearby mobile-phone assembly facility in Kamp-Lintfort, must lower costs or see 2,000 jobs leave.

"I want to keep the jobs here," von Pierer said.

Employee representative Stahl said the move to Hungary offered a 20 percent to 25 percent cost savings. "We tried to show in various ways how it would be possible to match this cost advantage here."

"Unfortunately it wasn't possible to do it by other means," Stahl said. "We were instead forced, if we wanted to keep the work, in the end to introduce a longer working time. Just by doing that, we achieved a cost saving of 14.3 percent."

The rest of the savings came from dropping extra pay for night shifts and by making another cherished German labor tradition -- the yearend bonus of a month's pay -- tied to performance instead.

Stahl warned that the deal worked only because Siemens had enough work fixing cordless and mobile phones to fill the extra hours at the center, so it shouldn't be seen as a model.

"This was a step back," he said, "and one must be very careful with such steps."

IG Metall leaders have vowed to fight the trend.

Their leader, Juergen Peters, has called the push for shorter hours "madness." His deputy, Berthold Huber, said that "if the head of Siemens doesn't get down from his political high horse, the company will face a huge confrontation."

IG Metall's right to strike, however, is limited under German law while a collective bargaining agreement is in effect.

During the 1980s, as unemployment rose steadily in Germany, the union began a push for lower hours on the theory that would spread available work among more people.

After the 1984 strike, the union won a step-by step reduction from 40 hours to 35 hours a week by 1995. Most Germans in other sectors work several hours a week longer; the contractual average is 37 hours.

Workers at many companies have agreed to work longer anyway, especially in struggling formerly communist east Germany. And unemployment has in fact kept inching up.

But working longer for the same pay also isn't a cure-all for Germany's economy, burdened by excessive regulation and inflexibility in hiring and firing, Schnabel said.

In the short term, stretching the week "doesn't create additional jobs," he said.

"It may be a quick solution for saving jobs."