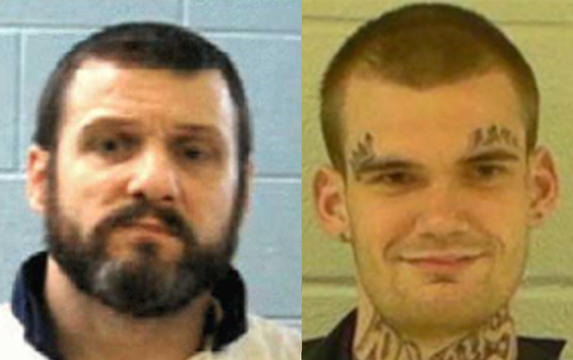 Two escaped Georgia inmates have been captured, according to a tweet from Georgia Gov. Nathan Deal and the Georgia Bureau of Investigation. The duo were held at gunpoint by a rural Tennessee homeowner after they were trying to steal his vehicle, according to authorities.

Donnie Rowe, 43, and Ricky Dubose, 24, had been on the run since Tuesday after killing two guards on a prison bus in Georgia.

Gov. Deal's tweet read that the fugitives are "in custody following car chase" in Tennessee.

It was believed that Dubose and Rowe tied up an elderly couple in Shelbyville and held them at gunpoint, according to CBS affiliate WGCL-TV. The suspects then stole their vehicle and drove on Interstate 24 where they shot at sheriff's deputies who chased them, according to the Tennessee Highway Patrol.

After crashing the car, the two men fled on foot and came upon a home after running through the woods. The suspects were held at gunpoint after a homeowner saw them trying to steal his car. A neighbor stepped in to help while authorities arrived on scene.

The pair were captured in rural community of Christiana, Tennessee, according to Georgia Bureau of Investigation spokeswoman Nelly Miles. That ended a massive manhunt which spanned multiple states.

The Associated Press reports the Tennessee Bureau of Investigation will take part in processing the scene.

Gov. Deal issued a statement late Thursday praising those involved in capturing the men and wrote that the public is safe.

"Rest assured, justice will be served. My sincere thanks to our local, state and federal law enforcement officers who assisted in the manhunt," Deal wrote.

"We are relieved to know that these two dangerous individuals have been taken off the streets, and the public is out of harm's way," said Commissioner Dozier. "They will be brought to justice swiftly for their heinous crime against our Officers."

Rowe and Dubose are being held in the Rutherford County jail, the AP reports.

The inmates were being transported in a bus Tuesday morning when they allegedly overpowered two corrections officers on board, stealing their firearms and carjacking a green Honda Civic.

Sills was emotional as he described the scene.

"I saw two brutally murdered corrections officers, that's what I saw," he said. "I have their blood on my shoes."

Donnie Russell Rowe, serving life without parole, and Ricky Dubose, who has prominent tattoos on his face and neck, overpowered, disarmed and killed Sgt. Christopher Monica and Sgt. Curtis Billue and then carjacked a driver who happened to pull up behind the bus on a rural highway, Sills said.

"The pain endured by the families and loved ones of Sgt. Christopher Monica and Sgt. Curtis Billue endures," Gov. Deal mentioned in his statement Thursday night. "We will do everything in our power to support their loved ones, and we will not forget their sacrifice and service."

The Georgia Bureau of Investigation increased reward money on Wednesday for information leading to their capture.

Sills had described the fugitives this week as "dangerous beyond description."

Monica and Billue were both transfer sergeants at Baldwin State Prison, according to The Associated Press. Monica had been with the Georgia Department of Corrections since October 2009 and Billue since July 2007.

How the two inmates managed to reach and overpower the guards remains under investigation, Sills said.

"They were inside the caged area of the bus," he said. "How they got through the locks and things up to that area I do not know."

Protocol is to have two armed corrections officers on the bus, but the officers don't wear bullet-proof vests during transfers, Dozier said.

"We lost two of our fellow officers, two of our kin. We see our officers as our family," he said.

Monica was 42 and leaves behind a wife, Dozier said. Billue was 58 and is survived by his father, five sisters, two brothers and two sons, said Jim Green, an attorney who's speaking for the Billue family.