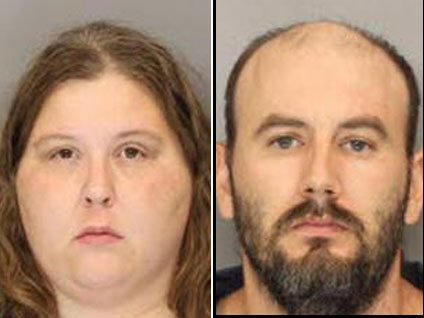 Two young sisters from Georgia have spent their summer - and most of their lives - locked inside their filth-ridden house surrounded by cockroaches, fleas, and "giant spiders," authorities say.

Cobb County Police invaded the home  near Marietta on Monday, Aug. 16, and have since charged James and Anne Cardona with felony child cruelty, and contributing to the delinquency of a minor, reports The Atlanta-Journal Constitution.

When police first entered the dilapidated home, they were taken aback by the smell of "urine and mold" and could not believe that anyone in their right mind would inhabit the house.

Unfortunately, they had not yet met the Cardonas' 5-year-old and 4-year-old daughters.

"[The five year old's] hair is matted together with bugs and tangles, with head lice large enough to see while standing above the child," read the responding officers' account.

Police say they found the 4-year-old lying on a filthy mattress without bedding in a urine-soaked diaper, and her feet were black from dirt.

For their health and safety's sake, both girls were take out of the home and moved into state care.

James Cardona's sister told the newspaper that the girls should have been taken away years ago, saying, "I tried to tell them you need to clean this place. They said they couldn't help themselves."

According to neighbors who spoke with the paper, the girls spent a nominal amount of time outside in the yard amongst the fallen trees and discarded folding chairs.

Normer Adams, executive director of the Georgia Association of Homes and Services for Children, told the newspaper it would be difficult for the Cardonas to regain custody of their daughters.

"Any parent in their right mind would see these children are suffering," he said.