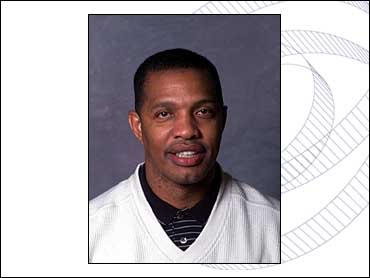 Alvin Gentry was introduced Thursday as coach of the franchise loaded with young talent and burdened with a checkered history.

"If you look at what happened on draft night, I think there are a lot of people who would like to be where I am," Gentry said.

The Clippers signed Gentry, 45, to a four-year deal and terms of the contract were not disclosed.

He had accepted a job as an assistant with the San Antonio Spurs on June 16, and turned down a similar offer from the Atlanta Hawks three days earlier.

"The only thing distracting about this job is I've got suits older than most of the players here," said Gentry, whose hiring capped a busy week in which the Clippers signed first-round draft picks Darius Miles, Keyon Dooling and Quentin Richardson.

"This is basically a college atmosphere," Gentry said, and noted that rules will be the primary means of getting his message to the players.

"I don't want to treat these guys as babies," he said. "We have to make them understand that this is a job and there are responsibilities that go with that."

He made no secret that the reconstituted team will be built around Lamar Odom, the budding second-year star.

"I'm not afraid to tell the other guys that this is his team. I look at him and I see the same talent as Grant Hill," said Gentry, who coached the star forward in Detroit.

Elgin Baylor, the Clippers' vice president of basketball operations, said Gentry's attitude will be key through the season.

"I think it's important to get someone with the right temperament to work with the players and improve them," he said.

Gentry compiled an 88-93 record during parts of four seasons as a head coach, most recently with Detroit, where he was 28-30 last season and 73-72 overall before being fired on March 6.

His first head coaching stint was with Miami, taking over in an interim capacity in February 1995 and finishing that season with record of 15-21.

He also was an assistant with the Clippers during the 1990-91 season.

Gentry's hiring fills a void left when the Clippers fired Chris Ford in February and decided not to hire interim coach Jim Todd after the team finished with an NBA-worst 15-67 record.

Gentry steered away from commenting on the checkered past of the franchise.

"We've got to be judged on what happens from this day forward," he said.

The Clippers thought they had a coach last week hen they offered University of Cincinnati coach Bob Huggins a reported four-year deal worth $8 million.

But Huggins turned it down, saying that he wanted to win a national championship with the Bearcats.

Center Michael Olowokandi expressed relief that the search was over.

"Every team needs a coach, be it in off-season workouts or during the season," he said.