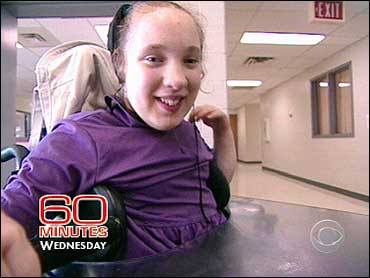 It doesn't get much more peaceful than the simple life among the Amish in rural Ohio. They have no cars, no electricity, no televisions.

But their children have medical conditions so rare, doctors don't have names for them yet, reports correspondent Vicki Mabrey.

The Amish make up only about 10 percent of the population in Geagua County in Ohio, but they're half of the special needs cases. Three of the five Miller children, for example, have a mysterious crippling disease that has no name and no known cure.

Their father, Bob Miller, says he realizes there is a crisis in the community, which is why he and two other fathers, Erwin Kuhns and Robert Hershberger, have agreed to break a strict Amish rule that forbids them to appear on camera. The three sat for an informal interview.

The three Byler sisters were all born with a condition that has no cure and mysteriously leads to severe mental retardation and a host of physical problems. Last year, doctors figured out the girls have the gene for something called Cohen Syndrome; there are only 100 known cases worldwide.

Since then, more than a dozen other cases of Cohen's have been discovered in Ohio Amish country.

"Nobody knew it was around here and we found, what, 20 to 30 cases in this area now that they didn't realize. Nobody knew about it," says Erwin Kuhns.

But for so many years, the Amish have had no names for these disorders. It was simply a mystery why half the headstones in Amish cemeteries were headstones of children.

The genetic problems come down to something called the "founder effect" because the nearly 150,000 Amish in America can trace their roots back to a few hundred German-Swiss settlers who brought the Amish and Mennonite faiths to the United States in the 18th century. Over generations of intermarriage, rare genetic flaws have shown up, flaws which most of us carry within our genetic makeup but which don't show up unless we marry someone else with the same rare genetic markers.

Kuhns and Miller admit these conditions have gotten more widespread in recent years. So much so that concerned families pulled together, held an auction and raised enough to build a clinic within buggy range of all the Amish. They also hired a pediatrician and researcher named Dr. Heng Wang to start caring for their children.

Kuhns' daughter isn't doing well at the moment, but now he can take her to the clinic every day, if needed, and the doctor has even made house calls at his home.

While 60 Minutes Wednesday was in Ohio, Dr. Wang made a house call to check on the Miller children. Bobby Junior, the sickest, can't tell Wang what's bothering him because he can't even talk.

And the doctor was treating these challenging cases under the most rudimentary conditions since Amish custom prohibits electricity. Still, he doesn't complain. In fact, he calls the heritage beautiful and says, "We are not come here to change them."

Certain homes, like the Miller's, have taken small steps toward change. Some with lifesaving medical equipment have asked for special dispensation from the Amish bishop to install solar panels to run the machines.

Iva Byler, mother of the three girls with Cohen Syndrome, made an even more drastic change eight years ago, after her third child in a row showed signs of this crippling disorder.

"I knew as soon as I had the third one, I knew," she says. "They kept telling me, 'No, she's OK.' No, she wasn't. I could hear by her cry that she was gonna be like the others. Their cry is different. You can tell. After you've lived with it that long, you know."

Now, when she needs to go to the doctor, she wheels the girls into her van. She's left buggy rides, and the whole Amish lifestyle, behind. But the price was being shunned forever by the community, as well as her ex-husband and her two healthy adult children.

Irma's now tuned in to the 20th century, and Iva's plugged into the 21st. Using a genealogy Web site, she's figured out she and her ex-husband were distantly related, something that appears to be common among the Amish.

"I don't think the Amish really understand that it's a genetic disorder that causes the handicapping condition," Byler says.

The Amish think it is God's will; "Gottes Wille" is how they describe it.

Dr. Harold Cross, who's from an Amish background himself, has heard that for more than 40 years, since he first discovered the high incidence of genetic problems in the Amish in the 1960s.

"Although we used state-of-the-art medical technology and genetics technology at the time," he says, "we didn't know about the human genome. We weren't able to--to drill down and get to the specific molecular defects. So I always felt like we hadn't finished the job that we had started doing."

He's finishing the job now, learning by examining some of the children in Geauga County, Ohio, and teaming up with researchers in a London lab to find the actual genes that are causing the Amish disorders.

"What we're really trying to do eventually by pinning down the mutation is to find some kind of treatment," he says. "If we can find out what went wrong, we might be able to correct it."

There are no cures in sight yet, but these doctors are able to offer the next best thing: pre-marital testing, to help future parents avoid these tragedies.

It's a powerful new tool for the Amish, if they choose to use it.

Despite the illnesses in his family, Miller would not use such tests. "That's our-- our lifestyle is that way. We-- we trust God to take care of that, you know? We just, just the way we—we - live."

Joyce Brubacker, who comes from the slightly less-orthodox Mennonite faith, says at minimum the Amish and Mennonites should be testing their children as soon as they're born. That's what saved her daughter Shayla's life. After her first child, Monte, died of an unusual-sounding genetic condition called Maple Syrup Urine Disease, Joyce had Shayla tested, and she was positive.

If she had not been tested, Shayla says, "I probably would have been in a coma or died at that point, or had brain swelling which would have took me very dramatic. I mean it would just-- boom, boom, boom and I woulda been dead."

Right now, the best prevention for many of these mutations is to prevent intermarriage, which is hard to do.

Marrying outside the faith could create a healthier gene pool, but it would also ultimately destroy the very essence of what it means to be Amish.

"I have a son that married a girl, they share the same great-great grandfather," says Iva Byler. "And when he called me to tell me that he was gonna get married, I said, 'Do you realize that you already stand a big chance to have a handicapped child since you have three siblings.' And he says, 'Yes, I know.' He got married anyway."