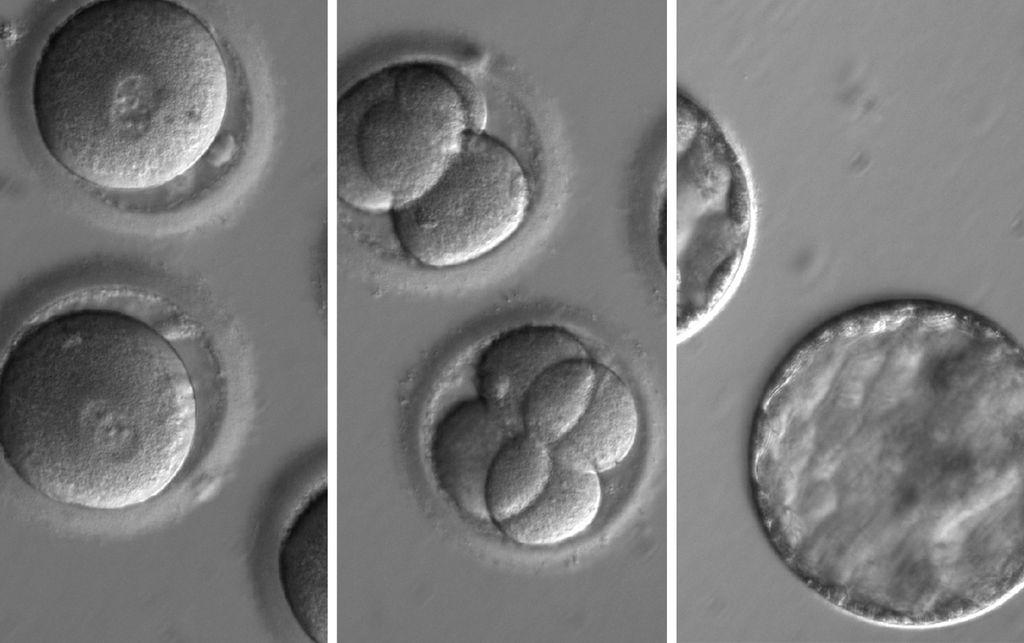 WASHINGTON -- For the first time, researchers in the U.S. have safely repaired a disease-causing gene in human embryos, targeting a heart defect best known for killing young athletes -- a big step toward one day preventing a list of inherited diseases. The breakthrough is also prompting debate about the ethics of altering DNA for generations to come.

Scientists from Oregon Health and & Science University used the gene-editing tool CRISPR to target the mutation that causes hypertrophic cardiomyopathy, a common genetic heart disease that can cause sudden cardiac death and heart failure.

The research, published in the journal Nature, demonstrates a new method of fixing a disease-causing mutation and preventing it from being passed down to future generations.

"Every generation on would carry this repair because we've removed the disease-causing gene variant from that family's lineage," senior author Shoukhrat Mitalipov, Ph.D., who directs the Center for Embryonic Cell and Gene Therapy at OHSU in Portland, Oregon, said in a statement. "By using this technique, it's possible to reduce the burden of this heritable disease on the family and eventually the human population."

The successful experiment involved altering defective embryos in a lab; they were not implanted or allowed to develop.

This type of gene editing technology is already used every day in fields ranging from agriculture to drug development. The tools enable scientists to alter the DNA of living cells -- from plants, animals, and now, potentially, even humans -- more precisely than ever before. Think of it as a biological cut-and-paste program. Here is a closer look at the science.

What is gene editing?

While scientists have long been able to find defective genes, fixing them has been so cumbersome that it's slowed development of genetic therapies. There are several gene editing methods, but a tool called CRISPR-Cas9 has sparked a boom in research as laboratories worldwide adopted it over the past five years because it's faster, cheaper, simple to use with minimal training and allows manipulation of multiple genes at the same time.

Pieces of RNA are engineered to be a guide that homes in on the targeted stretch of genetic material. The Cas9 is an enzyme that acts like molecular scissors to snip that spot. That allows scientists to delete, repair, or replace a particular gene.

"What it does is, it searches out the one error in the 3 billion letters of the DNA code and it chops it out, and the DNA corrects itself," CBS News medical contributor Dr. David Agus explained on "CBS This Morning." "In 72 percent of the embryos they did it in, it worked."

Agus also noted that in the experiments, the technique proved to be very precise in targeting the defective gene, leaving the rest of the embryo's DNA "untouched."

The fresh attention comes from research involving human embryos. In laboratory experiments, a team lead by Oregon researchers used CRISPR to successfully repair a heart-damaging gene in human embryos, marking a step toward one day being able to prevent inherited diseases from being passed on to the next generation. But there's wide agreement that more research is needed before ever testing the technique in pregnancy.

The biggest everyday use of CRISPR so far is to engineer animals with human-like disorders for basic research, such as learning how genes cause disease or influence development and what therapies might help.

But promising research, in labs and animals so far, also suggests gene editing might lead to treatments for such diseases as sickle cell, cancer, maybe Huntington's -- by altering cells and returning them to the body. Another project aims to one day grow transplantable human organs inside pigs.

Safety is a key question because gene editing isn't always precise enough; there's the possibility of accidentally cutting DNA that's similar to the real target. Researchers have improved precision in recent years, but out-of-body treatments like using cells as drugs get around the fear of fixing one problem only to spark another.

Altering genes in sperm, eggs or embryos can spread those changes to future generations, so-called "germline" engineering. But it's ethically charged because future generations couldn't consent, any long-term negative effects might not become apparent for years, and there's concern about babies designed with enhanced traits rather than to prevent disease.

Earlier this year, an ethics report from the prestigious National Academy of Sciences opened the door to lab research to figure out how to make such changes -- but said if germline editing ever is allowed, it should be reserved for serious diseases with no good alternatives and performed under rigorous oversight.

"Think about it, what are the unintended consequences? And who's to say which genes should be repaired? What is a defect? Overall, the big question is, do we have the wisdom to use this new technology?" he said. "It's still many years away from being used out there in the field, but there are a lot of questions to be addressed."

Where you live determines if, or what kind of, research can be performed on human embryos. Some countries, especially in Europe, ban germline research. Britain allows basic lab research only.

In the U.S., scientists can perform laboratory embryo research only with private, not federal taxpayer, funding, as the Oregon team did. Any attempt to study germline editing in pregnant women would require permission from the Food and Drug Administration, which is currently prohibited by Congress from reviewing any such request.