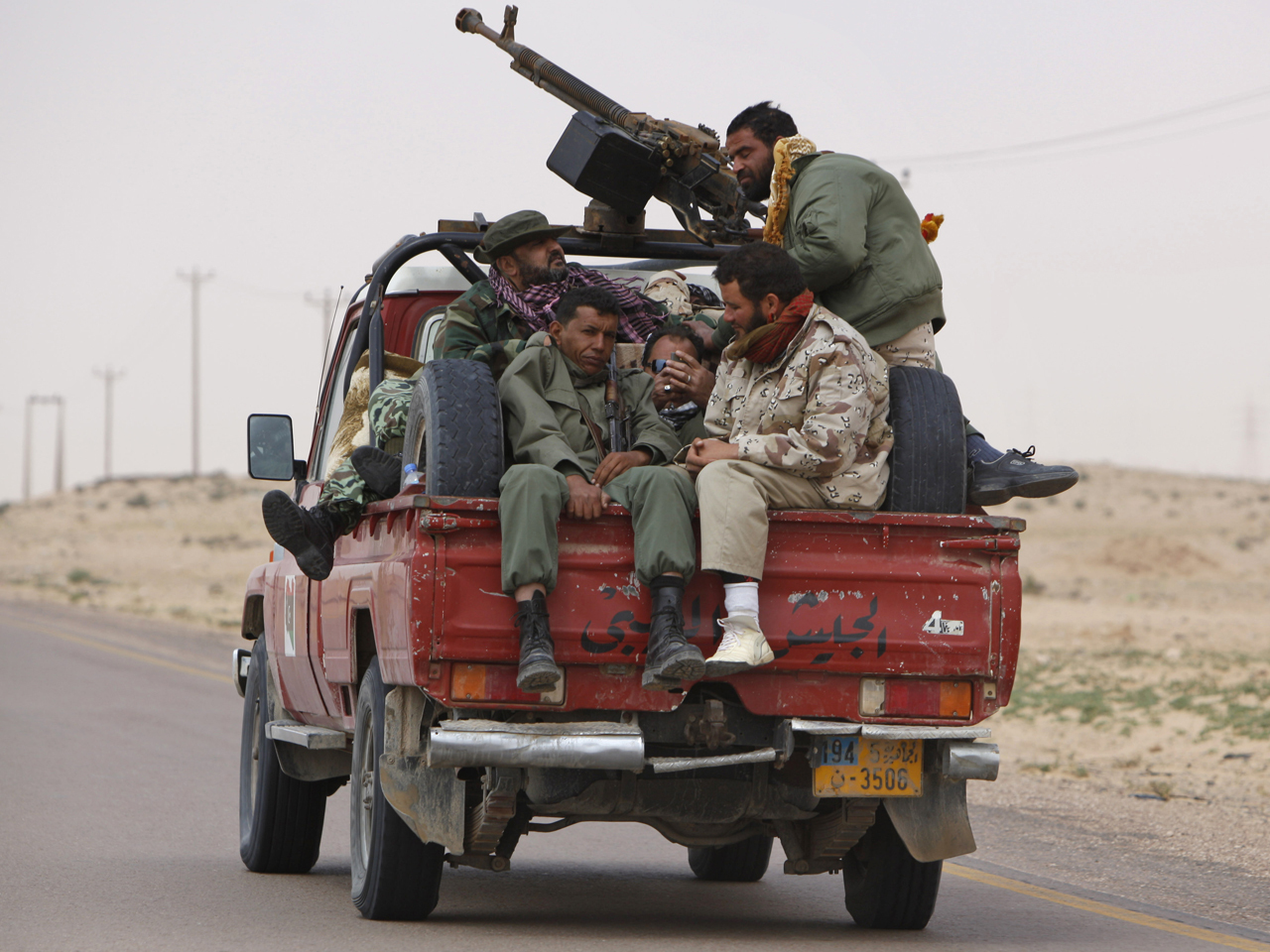 WASHINGTON - The United States may consider sending troops into Libya with a possible international ground force that could aid the rebels, according to the general who led the military mission until NATO took over.

Army Gen. Carter Ham also told lawmakers Thursday that added American participation would not be ideal, and ground troops could erode the international coalition and make it more difficult to get Arab support for operations in Libya.

Ham said the operation was largely stalemated now and was more likely to remain that way since America has transferred control to NATO.

He said NATO has done an effective job in an increasingly complex combat situation. But he noted that, in a new tactic, Muammar Qaddafi's forces are making airstrikes more difficult by staging military forces and vehicles near civilian areas such as schools and mosques.

The use of an international ground force is a possible plan to bolster rebels fighting forces loyal to the Libyan leader, Ham said at a Senate Armed Services Committee hearing.

Asked if the U.S. would provide troops, Ham said, "I suspect there might be some consideration of that. My personal view at this point would be that that's probably not the ideal circumstance, again for the regional reaction that having American boots on the ground would entail."

President Barack Obama has said repeatedly there will be no U.S. troops on the ground in Libya, although there are reports of small CIA teams in the country. Secretary of Defense Robert Gates told lawmakers last week that there would be no American ground troops in Libya "as long as I am in this job."

Ham disclosed that the United States is providing some strike aircraft to the NATO operation that do not need to go through the special approval process recently established. The powerful side-firing AC-130 gunship is available to NATO commanders, he said.

Other strike aircraft, including fighters and the A-10 Thunderbolt, which can provide close air support for ground forces, must be requested through U.S. European Command and approved by top U.S. leaders, including Defense Secretary Robert Gates. Ham said that process is quick, and other defense officials have said it can take about a day for the U.S. to approve the request and move the aircraft in from bases in Europe.

Ham said recent bad weather and threats from Qaddafi's mobile surface-to-air missile systems hampered efforts to use aircraft like the AC-130 and the A-10 to provide close air support for friendly ground forces. He says those conditions contributed to the stalemate.

Since the U.S. handed off the strike mission to NATO, U.S. planes account for only 15 percent of NATO planes now doing those air attacks, Ham said.

Meanwhile, rebel fighters claimed NATO airstrikes blasted their forces Thursday in another apparent mistake that sharply escalated anger about coordination with the military alliance in efforts to cripple Libyan forces. At least two rebels were killed and more than a dozen injured, a doctor said.

The attack - near the front lines outside the eastern oil port of Brega - would be the second accidental NATO strike against rebel forces in less than a week and brought cries of outrage from fighters struggling against Muammar Qaddafi's larger and more experienced military.

"Down, down with NATO," shouted one fighter as dozens of rebel vehicles raced eastward from the front toward the rebel-held city of Ajbadiya.

In Brussels, a NATO official said the alliance will look into the latest rebel claims but he had no immediate information. The officials spoke on condition of anonymity under standing regulations.

NATO last week took control over the international airstrikes that began March 19 as a U.S.-led mission. The airstrikes thwarted Qaddafi's efforts to crush the rebellion in the North African nation he has ruled for more than four decades, but the rebels remain outnumbered and outgunned and have had difficulty pushing into government-held territory even with air support.

A rebel commander, Ayman Abdul-Karim, said he saw airstrikes hit tanks and a rebel convoy, which included a passenger bus carrying fighters toward Brega. He and other rebels described dozens killed or wounded, but a precise casualty toll was not immediately known.

A doctor at Ajbadiya Hospital, Hakim al-Abeidi, said at least two people were killed and 16 injured, some with serious burns. Other rebel leaders said other casualties were left in the field in the chaos to flee the area.

On Saturday, a NATO airstrike killed 13 rebel fighters in eastern Libya. An opposition spokesman described it as an "unfortunate accident" in the shifting battles and pledged support for the international air campaign to weaken Qaddafi's military power.

But rebel discontent with NATO appears to be growing. Opposition commanders have complained in recent days that the airstrikes were coming too slowly and lacking the precision to give the rebels a clear edge. NATO officials say that the pro-Qaddafi troops have blended into civilian areas in efforts to frustrate the alliances bombing runs.

The rebel commander Adbul-Karim said the tops of rebel vehicles were marked with yellow under advice by NATO to identify the opposition forces. The attack occurred about 18 miles from Brega, where rebel forces have struggled to break through government lines.

In the Libyan capital, Tripoli, government officials have blamed Britain for attacks on the country's largest oil field, countering rebel claims that Qaddafi forces were behind the attacks that have shut down production.

Two explosions were heard Thursday in Tripoli, but the cause of the blasts was not immediately known.

Qaddafi, meanwhile, appealed in a letter to President Obama to halt the NATO operation to protect opponents of his regime. The letter, obtained by The Associated Press, implores Obama to stop what he called an "unjust war against a small people of a developing country."

As the fighting continues, so does the diplomatic effort to convince Qaddafi to step down -- unofficially, at least.

Former congressman Curt Weldon is expected to meet with Qaddafi in Libya sometime this week, and says he plans to ask the embattled leader to step aside.

Weldon was part of a congressional delegation to Libya in 2004 and has visited the country several times. His current visit is a private mission at the invitation of the Qaddafi government, but with the knowledge of the White House and members of congress, Weldon told CBS News producer Ben Plesser and a reporter from the Wall Street Journal.

Sitting in the lobby of his hotel in Tripoli Wednesday, the former congressman seemed aware of the fact that his visit to Libya, and his meeting with Qaddafi would draw criticism back home.

"I'm not here to argue about whether I'm allowed to be here," Weldon said. "I'm not doing anything illegal. No one's paying me to be here. I'm here because I want to do something positive. And I want to help my government get out of what is a very difficult situation. I'm not here to undermine Barack Obama."