Why is everyone surprised to learn that Treasury Secretary Timothy Geithner's speed dial is filled with Wall Street CEOs? Even before the financial crisis, when he was running the New York Fed, Geithner was delighted to act as the nerdy wanna-be for the exclusive power club, garnering invitations to corporate dining rooms from his former mentors. 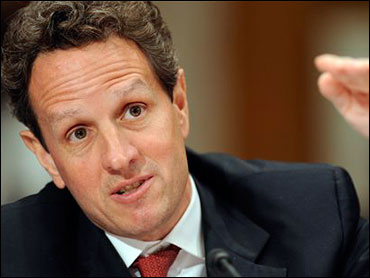 (AP)
In fact, Geithner was chosen as Treasury Secretary precisely because he was wired into the big banks. There's a reason that Wall Street cheered his nomination to the post. For all of its talk about change, the Obama Administration is filled with recycled Clintonistas, like Geithner and Lawrence Summers, who were at the forefront of deregulation.

As we watch the circus around regulatory reform, Geithner should serve as an expert witness in discussing conflicts. After all, the New York Fed (as well as all 12 of the Federal Reserve Banks) are owned by the institutions they regulate, and they are also partly controlled by the Federal Reserve in Washington.

I've completely lowered my expectations for regulatory reform. Whether due to health care taking center stage, Wall Street lobbying efforts or government officials unwilling to take a real stand, I'm preparing for a watered down effort with little lasting impact.

More on MoneyWatch:
•Should You Worry About the Dollar?
•29 Fees We Hate Most
•Why You're Paying More ... for Everything
•How to Lower Your Property Taxes
•End of Recession? Not So Fast