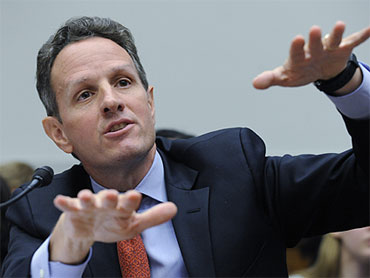 As the G-20 global economic summit gets underway in Toronto, the Obama administration is pushing for cooperation among the world's leading countries to maintain the economic recovery.

Speaking to reporters Saturday, Treasury Secretary Timothy Geithner tried to tamp down reports that the U.S. and European countries disagree on how best to go from government stimulus to spending cuts to reduce debt. He maintained the language that the administration has taken recently, issuing subtle warnings to other world leaders that ending stimulus spending too quickly could halt or even reverse the recent economic growth.

"When you look at how governments have acted in the past in past crises, you know history is riddled with mistakes, and the two most important types of mistakes you see are governments waiting too long to escalate, hoping it won't be as severe as people fear, waiting too tentative too early not doing enough soon enough," Geithner said.

"But there is another mistake governments have made over time, which is to in a sense step back too quickly in the hope that in the hope that it's over," said Geithner. "What we want to do is continue to emphasize that we are going to avoid that mistake by making sure that we recognize that it has only been a year since the world economy stopped collapsing."

Geithner also said that the United States has a strong plan for debt reduction once the economy has recovered and that the U.S. is past the halfway mark of the government's stimulus programs.