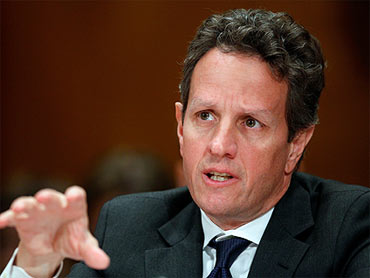 "It would be irresponsible to do otherwise," Geithner said.

The Troubled Asset Relief Program (TARP) was due to go out of business at the end of this month. But Geithner said Wednesday it would run through October, as the original legislation allowed.

Elizabeth Warren, who heads the independent oversight panel that Congress set up to monitor the bailout program, said the aid was "an important part of the government's rescue strategy" and saved the financial system from "imminent collapse."

But the Harvard University law professor told Geithner that it "has been far from an unmitigated success." She said consumers and small businesses still are having trouble obtaining loans even if big banks are getting back on their feet because of the program.

Panel member Paul S. Atkins, once on the Securities and Exchange Commission, said extending the program "borders on irresponsibility" and is a "a free option at taxpayer expense."

When the program was enacted in October 2008, financial markets were in free fall. The rescue package had an original price tag of $700 billion.

But the government said this week that banks are paying back the emergency loans faster than expected. That, plus interest and other returns, will mean the program will cost $200 billion less than expected.

President Barack Obama also said this week that this lower-than-expected spending would help free up federal dollars for a new stimulus package designed to promote job creation. Obama outlined new incentives to encourage small businesses to hire more workers, spending to speed up highway and other public works projects and rebates for people who make their homes more energy efficient.

Geithner said the government is committed to shutting down the bailout program, which has fueled public anger against a perceived government bias for Wall Street over Main Street.

"We will keep the government out of the business decisions of these companies and we will exit from our investments as soon as is practical and return ownership to private hands," Geithner said. "This strategy requires a temporary limited extension."

While the government is winding down the program, "We still need to keep in reserve some ability to respond" if faced with a new financial crisis. Walking away now would be like closing firehouses because fires were out, Geithner said. "It would leave the taxpayer at much greater risk of future losses. The ultimate cost of the program would go up, not down."

Panel member Paul S. Silvers, special counsel to the AFL-CIO, said the decision to extend the program "was the only responsible one."

Given the unpopularity of the program and the level of criticism of the administration, "it was an act of political courage," he said.

Still, Silvers told Geithner, "More must be done. TARP in its second year must work for Main Street, not just Wall Street." Silvers also said the administration must also address underlying weaknesses in large financial institutions "by cleaning up firms that are broken rather than continuing to hope that time will heal all wounds."