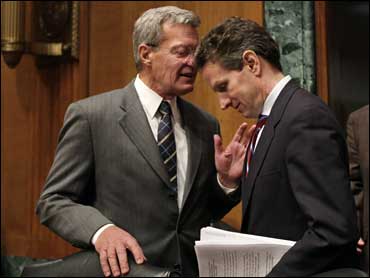 For five weeks, Treasury Secretary Timothy Geithner has battled the worst economic crisis in generations with no key deputies in place. That's made for a rocky debut for the man President Barack Obama put in charge of addressing the financial crisis.

Critics say part of the problem is that Geithner is flying solo: Not one of his top 17 deputies has been named, let alone confirmed. And without senior leadership, lower-level Treasury employees can't make decisions or represent the government in crucial conversations with banks and others.

As Geithner strives to address the financial crisis, advance Obama's agenda and work with foreign leaders to stave off economic disaster, he's assembled a 50-person "shadow cabinet" of would-be appointees. Those people have received hall passes and can advise Geithner, but they lack any authority.

"Everyone would think it's a travesty if the Defense Department didn't have a lot of their people in place, because you're in a crisis fighting a couple of wars," said Tony Fratto, who was a Treasury spokesman under President George W. Bush. "But Tim Geithner is fighting wars on a few fronts himself, and he doesn't have the generals there to help him."

Treasury's staff problems apparently have affected its ability to report to Congress on the massive bailouts it has been doling out.

At a Senate hearing Thursday about failed insurance giant American International Group Inc. - which has received four separate bailouts totaling more than $170 billion - Sen. Chris Dodd said he had asked Treasury for someone to appear, but that no one was available.

"I am not pleased that we don't have someone here from Treasury to explain what their role in this is," Dodd said.

Treasury officials contend that Geithner is receiving plenty of good advice, much of it from the 50 advisers already working there. But until Treasury gets some Senate-confirmed leaders, these people can't sign documents or make policy decisions. They can't even sit in their future offices.

To be sure, a great deal has happened at Treasury since Geithner assumed his post. The department has rolled out a few details of its much-maligned financial stability program, new programs to aid homeowners and has started assessing the strength of major financial institutions. And one official, Under Secretary for Terrorism and Financial Intelligence Stuart Levey, has been asked to stay on.

4789963The problem, critics say, is that many of these initiatives would have gone more smoothly if Geithner had a full complement of senior staffers to work with.

"The secretary of the treasury is sitting there without a deputy, without any undersecretaries, without any, as far as I know, assistant secretaries responsible in substantive areas at a time of very severe crisis," Volcker said. "He shouldn't be sitting there alone."

One likely nominee to a top Treasury post has not heard from the department for weeks, the person said, speaking anonymously because there has been no official offer. The person submitted voluminous information about taxes, domestic help and the like more than a month ago.

Former Treasury employees said that even the best lower-level staffers and top advisers can't do the work required of Treasury's top ranks. They can't explain Treasury's policies to a nervous public or give a fair hearing to stakeholders in the crucial decisions the department must make.

Fratto said Wall Street bankers complained to him recently that meeting with lower-level Treasury staff, rather than with senior appointees, wouldn't address their issues.

"They know that only the political appointees are the decision-makers," he said. "You can share information and work with people at the deputy assistant level, but the bosses just aren't there."

Meeting with Geithner could have satisfied the bankers, Fratto said, but the secretary has been stretched thin with congressional testimony, aid to automakers, restructuring the bailouts for Citigroup Inc. and American International Group Inc., reforming the regulatory system and developing a revamped bank rescue plan.

"They have a lot on their plate and more staff will help handle the work," said Scott Talbott, a lobbyist with the Financial Services Roundtable.

Perhaps Treasury's highest-profile effort - its management of the $700 billion financial system bailout - is still led by Neel Kashkari, a Bush administration holdover who officials said is on his way out.

Fratto said that makes it impossible for Kashkari to engage in real negotiations with banks. He said the bailout has been hurt by "uncertainty over what the policy is, the details, whether they're going to stick, whether the programs are going to change again - and these are all things that Neel probably can't answer for them, and no one can answer for them."

The concerns are gaining momentum in advance of next week's meeting in London with finance ministers of 20 major countries. Without political appointees to negotiate discussion points or the texts of public statements, the White House will have to take a larger role, former Treasury officials said.

For the first such meeting, in November, Deputy Treasury Secretary Robert Kimmitt traveled to Australia while then-Treasury Secretary Henry Paulson stayed in Washington. Geithner, overseeing bailouts that have ballooned in size and scope, has no such deputy.

Treasury's lack of official leadership created an opening for the State Department to assume a major role in economic dialogue with China, which had been a Treasury initiative, Fratto and others said.

Treasury doesn't "have the people at that table who can carry the weight in a fight with the State Department," Fratto said.

Treasury officials say they are very close to announcing their first slate of appointees, which will include some top-level officials outside the 50-person team now advising Geithner.

The current team includes about half the appointees Treasury will have to name.