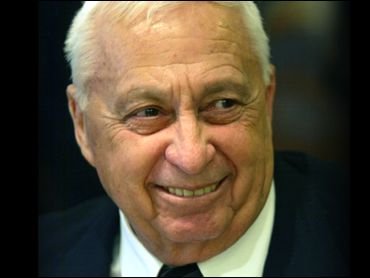 Prime Minister Ariel Sharon met Thursday with undecided Cabinet members in a bid to gain a majority for his revised plan to pull out of the Gaza Strip.

The Cabinet is to vote Sunday on the new version of the plan which calls for a gradual withdrawal in four phases. Sharon's Likud party rejected his initial plan in a vote earlier in the month.

The Jerusalem Post reports the cabinet will be asked to vote only on the first phase, which calls for the evacuation of three settlements, Netzarim, Rafah Yam and Morag.

Meanwhile, hundreds of Israeli women have formed a new grassroots movement calling for a unilateral Israeli withdrawal from the Gaza Strip, reports CBS News Correspondent Robert Berger. It follows the success of the Four Mothers movement in getting Israel out of Lebanon four years ago.

The new mothers movement is called "Shuvi" or "Come Back."

Shuvi member Dorit Eldar says eventually Israel will get out of Gaza, "and the sooner that happens, the better. We really don't have the lives to spare, and we don't have the blood ... to spare — neither soldiers nor citizens."

Critics say the group is hurting the morale of soldiers risking their lives in Gaza.

Sharon met Thursday with Finance Minister Benjamin Netanyahu and three other cabinet ministers on Thursday. The support of Netanyahu, a former prime minister and Sharon's biggest rival in Likud, is crucial for the plan's acceptance.

After his meeting with Sharon, Netanyahu said he would only back the first stage of the plan, but not the entire framework, which "is, essentially, the same plan rejected by Likud members, only broken down into stages."

Other cabinet members expressed unease that they would not get to vote on all four parts of the plan, which complete the evacuation of settlers from Gaza.

Sharon told Justice Minister Yosef Lapid, chairman of the Lapid party, that he is not giving up on his plan to evacuate all the settlements. Lapid said he is not sure how his party's ministers will vote.

For now, Sharon only has the support of 11 ministers in the 23-member Cabinet. Eight have said they oppose the plan, and the four who are undecided — including Netanyahu and Foreign Minister Silvan Shalom — appear closer to a "no" vote.

With Sharon facing possible defeat in the Cabinet, there was growing speculation about his political future. The Maariv daily quoted sources close to Netanyahu as saying he would have the backing of a majority of parliament members if he were to challenge for the leadership.

Also, Sharon's key coalition partner, the centrist Shinui Party, said it would reconsider its future in the government if the plan does not go ahead.

On Wednesday, an Israeli official said the new plan would see Israel pull out of Gaza and part of the West Bank in four stages.

Under the plan, three or four isolated Gaza settlements would be evacuated first, followed by the removal of other Israeli communities, a military withdrawal from Gaza and the evacuation of four small settlements in the northern part of the West Bank.

The Cabinet would vote on each stage.

Also, the new plan calls for many of the evacuated buildings to be destroyed.

The Haaretz daily reported Thursday that the withdrawal plan was expected to be carried out by the end of 2005, a target date similar to the first plan. It also said that details of the plan were expected to be presented to Jordan and Egypt on Thursday.

In a stinging defeat for the prime minister, Sharon's Likud Party rejected his original plan — which called for a pullout in one step — in a referendum on May 2, even though the plan had U.S. backing. After the party veto, the "Quartet" of Mideast mediators — the United States, European Union, Russia and the United Nations — also endorsed the pullout plan.

Analysts say the revised plan will cause Sharon just as much trouble as his original one, because opponents object in principle to evacuating settlements. They would just as vigorously oppose a blueprint for removing a few at a time as they would a one-step program.

Polls indicate a majority of Israelis support the plan.

Palestinians have been ambivalent about the proposal, demanding coordination with the Israelis over a withdrawal but welcoming, in principle, any Israeli evacuation of the Palestinian areas.

Promoting his failed original plan, Sharon said that there is no future for 7,500 Jewish settlers among 1.3 million Palestinians in the Gaza Strip, and the 21 settlements there must be sacrificed in order to assure the existence of settlements in the West Bank, where more than 200,000 Jews live in about 150 settlements.

The military said an operation was under way in an area where militants operate. The operation came days after the army ended a nearly weeklong offensive in the Rafah refugee camp in southern Gaza.

In the West Bank city of Nablus, troops demolished two houses of Palestinians involved in suicide bombings, the army said.