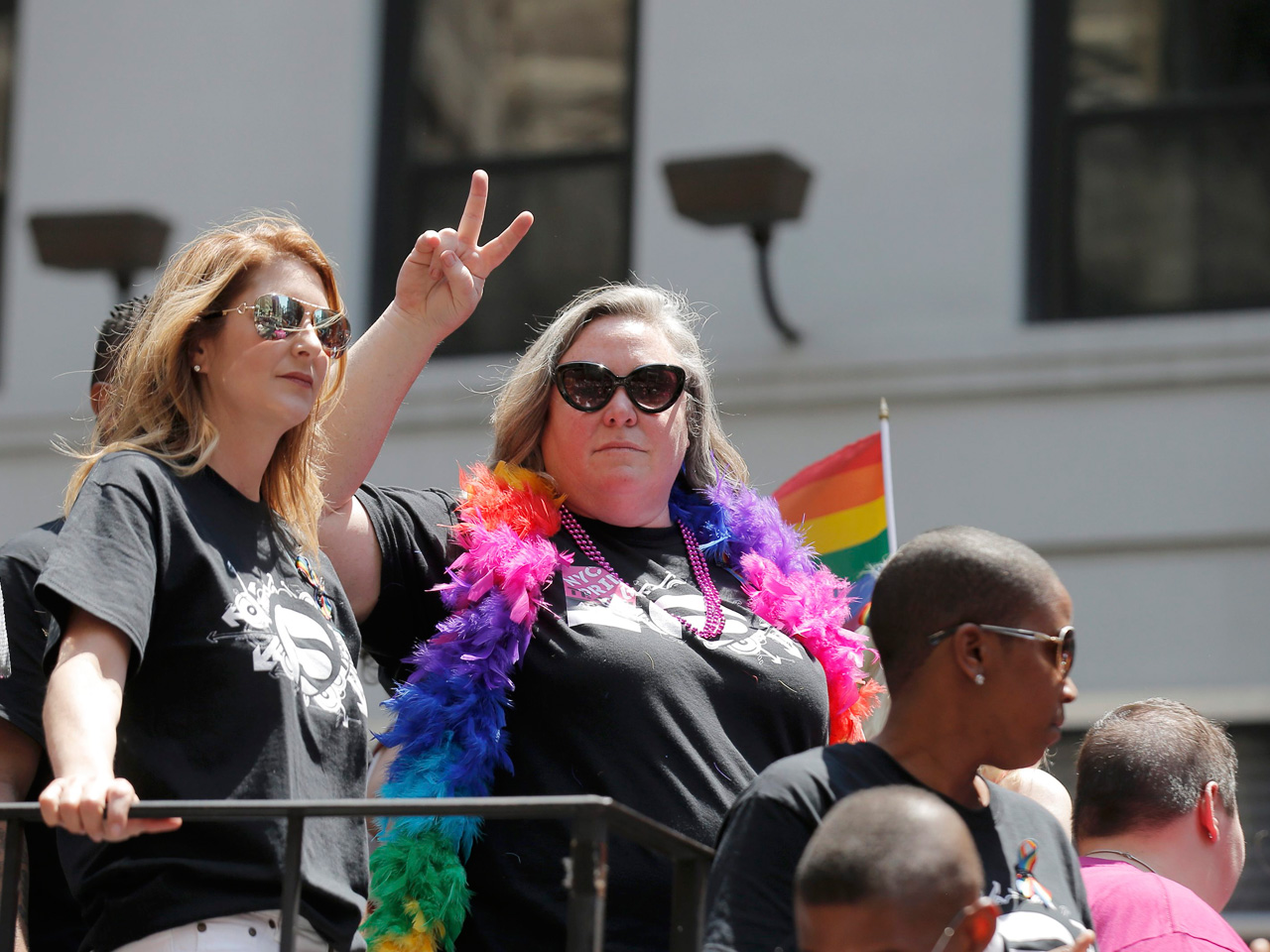 NEW YORK - With a moment of silence followed by the roar of motorcycles, New York City's gay pride parade kicked off Sunday, a celebration of barriers breached and a remembrance of the lives lost in the massacre at a gay nightclub in Orlando.

Crowds of onlookers stood a dozen deep along Fifth Avenue, many waving rainbow flags. Some spectators held up orange "We are Orlando" signs, and indications of increased security were everywhere, with armed officers standing by. An announcer introducing state officials and guests also shouted out, "Love is love! New York is Orlando!" in memory of the 49 people killed in Florida.

Organizers honored the shooting victims with the moment of silence but also wanted the pride and resilience to come through.

"It's critical that we provide a space where the LGBT community can be out and proud and demonstrate that hatred cannot silence us," James Fallarino, a spokesman for organizers of the parade, told CBS New York.

Authorities in New York had expected a larger-than-usual crowd -- with as many as two millions possibly lining the route -- and 15-year-old Chelsea Restrepo, of Staten Island, was among the onlookers. She had brushed aside her father's concerns about security to attend the march for the first time.

"What happened in Orlando made me want to come more," said Restrepo, swathed in a multicolored scarf. She said she wanted to show her support.

New York's parade was one of several being held Sunday across the country, along with San Francisco and Chicago. They came two weeks after the nation's deadliest mass shooting in modern U.S. history.

They also come after the Los Angeles pride parade was disturbed by the arrest of a heavily armed man carrying explosive material, which has put police protecting the events nationwide on high alert.

Fallarino said: "If we change our event - if we make everything somber - it's, in many ways, allowing those who wish to silence us to win."

Sunday's parades did have a new milestone to mark: President Barack Obama on Friday designated the site around New York City's Stonewall Inn as the first national monument to gay rights. A 1969 police raid on the bar helped catalyze the gay rights movement.

And just before the start of the parade, Democratic Gov. Andrew Cuomo announced that the Stonewall Inn would be designated as a state historic site and that New York would erect a monument in honor of all victims of hate and intolerance, including those killed in Orlando.

The lead float in New York's parade was dedicated to the Orlando victims. And gun-control, anti-gun-violence groups joined the lineup since the shooting forged new bonds between them and gay-rights activists.

"As the mom of a gay teen, Orlando terrified me," said Shannon Watts, the founder of Moms Demand Action for Gun Sense in America. She and 19-year-old daughter Emma, who is gay, planned to join about 200 other people behind the group's banner in the parade.

At San Francisco's parade, a "We're Orlando" group of about 300 people will be fourth in the lineup. Victims will be honored with a moment of silence when the march reaches the grandstand. A memorial with their photos will be set up inside City Hall.

"It's been an interesting experience to build the parade with kind of a heavier message" after the optimistic sentiment last year, Stephanie Mufson said.

New York police planned to deploy roving counterterrorism units and use bomb-sniffing dogs, rooftop observation posts, police helicopters and thousands of officers to provide extra layers of security at Sunday's parade. Thousands of uniformed officers were to line the route, supplemented by plainclothes officers in the crowd. While the city has provided similar protections in the past, "you'll see more" this year, Democratic Mayor Bill de Blasio said.

San Francisco spectators will face metal detectors for the first time, and more police than usual will keep watch. Some participants aren't welcoming the stepped-up security: Two honorary grand marshals and a health clinic that serves sex workers withdrew Friday from the parade to protest the heavy police presence.

Chicago police have put 200 more officers than usual on duty for the city's pride parade Sunday. Organizers have nearly doubled their corps of private security agents, to 160.

At a gay street parade in Turkey, a prominent German lawmaker and outspoken gay rights advocate was temporarily detained Sunday when he wanted to speak publicly at the end of Pride Week. Turkish police have repeatedly in recent days prevented activists from participating in LGBT rallies.

For all the security and solemnity, some spectators at pride parades this month have made a point of making merry.

"We had fun. That is what gay people do," comedian Guy Branum wrote in a New York Times essay after attending the West Hollywood parade. "Our answer to loss and indignity, it seems, is to give a party, have a parade and celebrate bits of happiness."