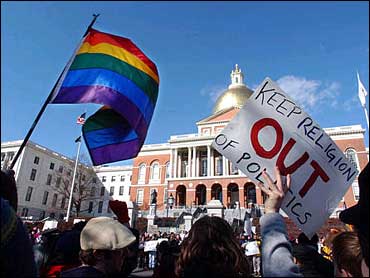 The Massachusetts Legislature narrowly rejected a compromise proposal Wednesday that sought to legalize civil unions but ban same-sex marriages, delivering a setback to lawmakers who wanted to avoid taking the divisive issue head-on.

It now appears when lawmakers return to the capitol Tuesday, only two options are left: ban marriage for gays and lesbians without establishing civil unions or leave the constitution as it is and gay and lesbian couples can begin applying for marriage licenses in May, reports CBS News Correspondent Jennifer Donelan.

The joint House and Senate session adjourned for the evening about 8:30 p.m. after about six hours of debate.

The bipartisan proposal was crafted by Senate leaders who wished to overturn a high court decision legalizing gay marriage while still extending equal benefits to gay couples. It was rejected 104-94.

The compromise would have made Vermont-style civil unions automatically legal in Massachusetts in November 2006, the earliest an amendment could be placed on a ballot for voter approval. At that time, any gay couples married in Massachusetts would be stripped of their licenses and considered part of a civil union.

Massachusetts was thrust into the epicenter of the national gay marriage debate in November when the Supreme Judicial Court ruled 4-3 that that it was unconstitutional to bar same-sex couples from marriage.

The court definitively reaffirmed the decision last week, clearing the way for the first state-recognized gay marriages in U.S. history to start taking place in May.

Rep. Philip Travis, a Democrat who sponsored the original ban on gay marriage, said the compromise proposal would have asked voters to decide on two potentially conflicting initiatives — a ban on gay marriage and the legalization of civil unions — with one vote.

"It goes beyond what the people wish to vote on," Travis said. "It is almost like offering a true-false question. How do you respond by voting yes or no at the ballot box?"

People from across the country were confronted with tight security and a throng of reporters as the lawmakers entered the volatile national debate over gay rights.

Impromptu rallies erupted outside the two-century-old building, and hundreds of people lined both sides of the street, holding signs, waving flags and eliciting honks from passing cars.

The chants broke out spontaneously in pockets up and down the street, and included, "Hey hey, ho ho homophobia's got to go." Others chanted, "Adam and Eve, not Adam and Steve," or held signs that read "Civil Unions = Sitting on the Back of the Bus."

While lawmakers in the state that legalized gay marriage decided whether to annul the process with new laws, President Bush was set to throw his full weight behind a federal constitutional amendment defining marriage as between a man and a woman, reports CBS News White House Correspondent John Roberts.

State police had to separate two crowds inside the Statehouse who began pushing and shoving after one group unfurled an American flag across from the chamber and began chanting "One Man. One Woman. Let the People Vote." Moments later, a contingent of gay marriage backers arrived shouting "Equality Now."

At one point, dozens of opponents of gay marriage knelt and prayed amid the din.

The debate began with consideration of an unexpected amendment, proposed at the last minute by House Speaker Thomas Finneran, that would ban gay marriage but allow the Legislature to adopt civil unions.

After two hours of debate and accusations that the Democratic speaker was trying to hijack the process, that amendment was shot down by a 100-98 vote.

Debate then turned to the Senate compromise, which suffered the same fate.

In arguing against the gay-marriage ban, Sen. Dianne Wilkerson drew upon her experience as a black woman growing up in Arkansas, where the hospital did not allow her mother to deliver her children.

"I know the pain of being less than equal and I cannot and will not impose that status on anyone else," a teary-eyed Wilkerson said. "I could not in good conscience ever vote to send anyone to that place from which my family fled."

Supporters of a ban called for the Legislature to respect 3,000 years of tradition.

"Every society, every culture, every nation in all of recorded history, including Massachusetts, has up until this point at least defined marriage as one man and one woman," Finneran said.

The votes will force lawmakers to finally declare their stand on a divisive social issue that most would prefer to avoid, especially with all 200 legislative seats up for grabs at the November elections.

In California, a state lawmaker plans to introduce legislation this week that would legalize gay marriage in that state.