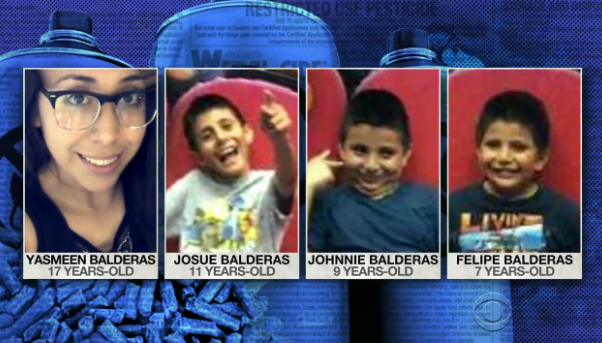 DALLAS -- A criminal investigation is underway into an apparent accidental poisoning involving a professional-grade pesticide that left four children dead and an Amarillo woman in critical condition, police said Tuesday.

Authorities are looking into why the family had the pesticide pellets, called Weevil-cide, which is only supposed to be sold to people with professional licenses or certification. The product’s manual, available online, outlines stringent guidelines for using the product including having two trained individuals apply it. Figures from the American Association of Poison Control Centers show that deaths from the pesticide are rare.

The father of the children who died told first responders through a Spanish language interpreter that he had spread the pellets under the family’s mobile home after obtaining the product from a friend, Amarillo Fire Capt. Larry Davis said. Davis said the product is not available for sale to the general public. The product’s manual says it’s intended for use in pest control in commercial transport or storage of commodities and animal feed.

Davis said the father does not have professional certification as far as he knows. He did not know whether the friend who gave him the product had a certification.

Amarillo police spokesman Officer Jeb Hilton says the department’s special crimes unit is investigating because of the child deaths. Once completed, the investigation will be turned over to the district attorney to determine whether charges will be filed. Hilton said other federal and state environmental regulation agencies may also investigate the use and storage of the chemical.

Fire officials said the children who died were three boys -- ages 7, 9 and 11 -- and a 17-year-old girl. Officials have said all four children lived at the home in Amarillo, which is about 350 miles northwest of Dallas.

The children’s mother, Martha Balderas, 45, was in critical condition Tuesday at University Medical Center in Lubbock, according to a hospital spokesman. Five other family members, including the father and four other children, were being treated at BSA Health System in Amarillo and were in stable condition, hospital and fire officials said early Tuesday.

Crews who responded to a 5 a.m. call to the home on Monday originally thought it was related to carbon monoxide poisoning. Authorities later determined that phosphine gas was likely released when the father took a garden hose at some point Sunday and tried to rinse away some of the pellets because family members had complained of the smell.

The water started the chemical reaction that released the phosphine gas. A visitor arrived early Monday, found everyone sick and called 911.

Phosphine gas can cause respiratory failure and in severe cases can cause a pulmonary edema, which fills the lungs full of fluid.

The American Association of Poison Control Centers, which compiles data on poisoning, shows nine deaths from ingesting or breathing in aluminum phosphide between 2010 and 2015.

Two of those deaths happened in Utah in 2010, when two young children died after a pest control company spread vole pesticide pellets that released phosphine gas. Authorities believe the gas seeped into the home through cracks in the foundation.

Cynthia Aaron, the medical director for the Michigan Regional Poison Control Center at Children’s Hospital of Michigan, said doctors there more often treated adult patients for exposure to phosphine gas from aluminum phosphide because the pesticide is often used in industrial shipping.

“It’s not a rare exposure, but deaths like this are rare,” she said. “We see mostly the overdoses. For example, they used to use this in ship holds when they ship grain. So if they are de-mousing the big ship hold and someone doesn’t realize the pesticide has been activated or they haven’t yet been aired out properly, they might enter and pass out or die.”

Chip Orton, emergency management coordinator for the city of Amarillo and Potter and Randall counties, says his staff was working with a number of state and federal agencies to decontaminate the Amarillo home. He did not know when it would be safe for the family to return.

About 10 police, fire and medical personnel who first responded to the home were taken to the hospital as a precautionary measure, Davis said. Two were kept overnight for observation because of headache and nausea but were in good condition Tuesday, he said.

Davis said the home was far enough away from neighbors that no other evacuations or treatments were necessary.

Neighbors told KFDA that the Balderas family was well known and liked in the community.

“There was a lot of love in that family and still is,” said Nichole Wells, a teacher at Travis Middle School who taught 3 of the 8 Balderas children. “They’ll wave, they’re polite, they’re respectful. They were just such a great family, and they really knew what it was to be a family. That’s for sure.”

Many said the family is going to struggle with the costs associated with the tragedy.

A GoFundMe page has been set up in the family’s name, and surpassed its goal of $25,000.