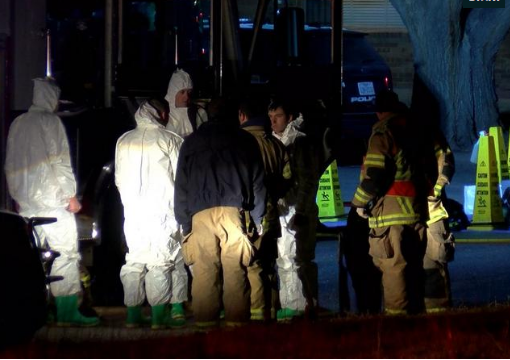 AMARILLO, Texas - A Texas woman was in critical condition Tuesday following an accidental poisoning at her home that killed four of her children and sickened five other family members, hospital and fire officials said.

Crews who responded to a 5 a.m. call to the home on Monday originally thought it was related to carbon monoxide poisoning, but authorities later determined that phosphine gas was likely released when a family member used water to wash away pesticide pellets he had placed under the mobile home. One child died at the scene and three others died at a hospital.

Martha Balderas, 45, of Amarillo was in critical condition Tuesday at University Medical Center in Lubbock, according to a hospital spokesman. Her husband and four of their children were in stable condition at BSA Health System in Amarillo, according to the hospital and fire officials.

Fire officials said the children who died were three boys aged 7, 9 and 11, and a 17-year-old girl. Officials have said all four children lived at the home.

Investigators said it’s unclear how long the residents had been exposed to the phosphine gas before a visitor arrived Monday and found everyone sick and called 911. Phosphine gas can cause respiratory failure and in severe cases can cause a pulmonary edema, which fills the lungs with fluid.

About 10 first responders from the police, fire and medical response departments were also taken to the hospital as a precautionary measure, but none had shown symptoms of illness.

CBS Amarillo affiliate KFDA reports aluminum phosphide is often used as a fumigant to get rid of pests like gophers and mice.

When aluminum phosphide is mixed with any moisture, it produces a toxic phosphine gas, which is what took the lives of the four kids. Officials said a resident of the east Amarillo home was trying to kill mice and placed the pesticide underneath their home, then applied water.

“They were already getting an odor and they were trying to suppress the vapors. He didn’t know enough about the chemical,” said Amarillo Fire Department Lieutenant Josh Whitney. “The chemical is only sold to people that have a license to apply it, and he got this black market. He applied it yesterday, and then so over the night is whenever all the toxic gasses were leeching to inside the house “

Aluminum phosphide is so strong it is classified as a “restricted use” pesticide and is only supposed to be sold to licensed professionals.

Neighbors told KFDA that the Balderas family was well known and liked in the community.

“There was a lot of love in that family and still is,” said Nichole Wells, a teacher at Travis Middle School who taught 3 of the 8 Balderas children. “They’ll wave, they’re polite, they’re respectful. They were just such a great family, and they really knew what it was to be a family. That’s for sure.”

Many said the family is going to struggle with the costs associated with the tragedy.

A GoFundMe page has been set up in the family’s name, and surpassed its original goal of $10,000 within 6 hours of being created.