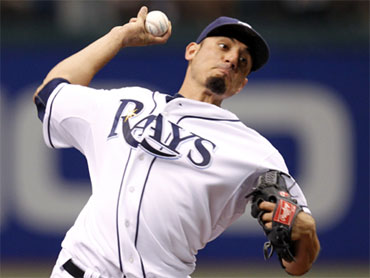 Matt Garza pitched the first no-hitter in Tampa Bay Rays history and the fifth in the major leagues this season, beating the Detroit Tigers 5-0 Monday night.

Garza faced the minimum 27 batters, allowing only a second-inning walk to Brennan Boesch, for a team that's often been on the wrong end of pitching gems lately.

The Rays have been held hitless three times since last July, including a pair of perfect games that were thrown against them.

"It was one of those days where everything lined up," Garza said. "The defense made great plays. I really can't say enough about them."

The last time there were at least five no-hitters in a season was 1991, when Hall of Famer Nolan Ryan threw one of seven in the big leagues that year, according to STATS LLC.

Garza, the 2008 AL championship series MVP, rebounded from one of his worst outings of the season. He retired pinch-hitter Ramon Santiago for the final out on an easy fly ball to right fielder Ben Zobrist, who made a terrific running catch in the third to rob Danny Worth of a hit.

Garza's teammates mobbed him near the mound after a performance that left the New York Mets and San Diego Padres as the only big league teams without a no-hitter. The Rays began play in 1998 - the Padres in 1969 and the Mets in '62.

The Tigers were no-hit for the first time since Randy Johnson shut them down at Seattle on June 2, 1990.

Garza struck out six en route to the first no-hitter tossed by the Rays. It came in the team's 2,039th game, and on a night in which the Rays struggled to generate much offense themselves.

Matt Joyce's grand slam with two outs in the sixth was the first hit off Detroit's Max Scherzer (7-8). The next batter, Jason Bartlett, singled for the only other hit of the night until Carl Crawford homered in the eighth for Tampa Bay.

The 26-year-old Garza, who tossed a one-hitter at Florida on June 26, 2008, retired Don Kelly on a routine grounder to second base and struck out Gerald Laird before getting Santiago to end it.

In addition to the five no-hitters thrown this season, the Year of the Pitcher, was the perfect game Detroit right-hander Armando Galarraga was denied because of a missed call at first base by umpire Jim Joyce.

Oakland's Dallas Braden tossed a perfect game against Tampa Bay on May 9, and Philadelphia's Roy Halladay also was perfect at Florida on May 29.

Arizona right-hander Edwin Jackson threw 149 pitches for a no-hitter against the Rays, his former team, at Tropicana Field on June 26. Colorado ace Ubaldo Jimenez pitched a no-hitter April 17 at Atlanta.

Mark Buehrle threw a perfect game for the Chicago White Sox against Tampa Bay on July 23, 2009.