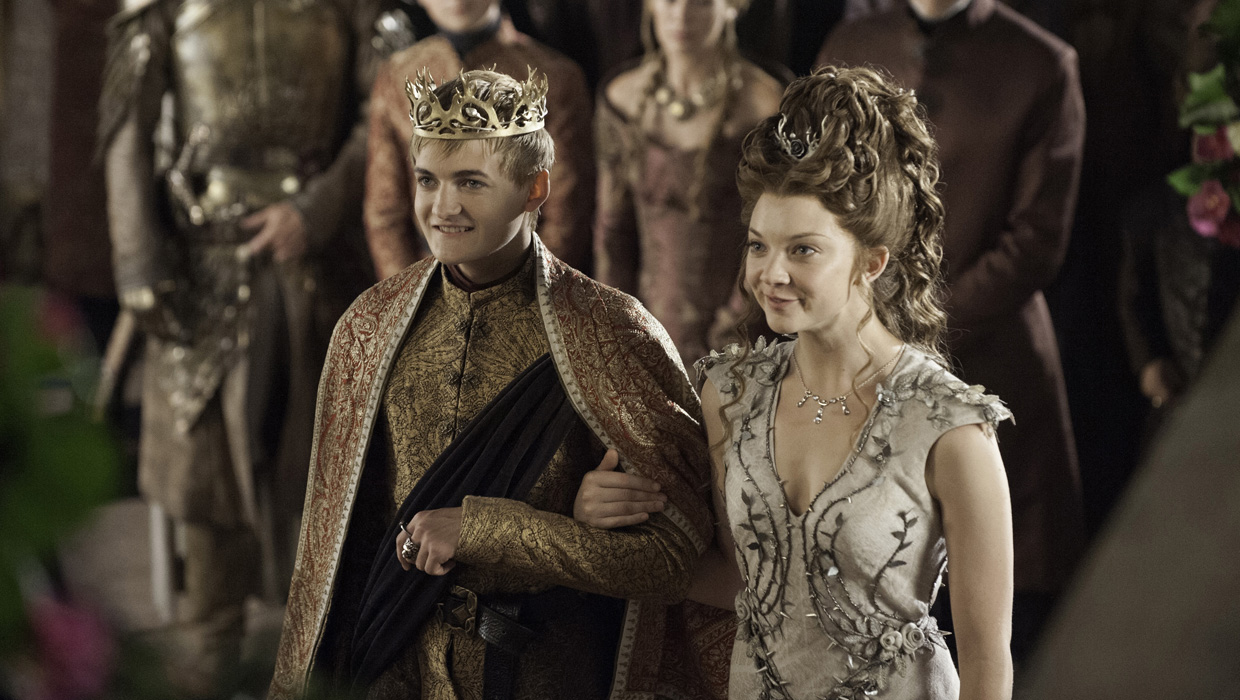 The characters on "Game of Thrones" might want to steer clear of weddings from now on.

Following the massacre of the Starks at the Red Wedding last season, another central character met his end at a wedding celebration during Sunday's episode.

So, who was it? [Spoilers below, obviously.]

RIP, King Joffrey. You were terrible and won't be missed.

You read that right -- the tyrant monarch was poisoned to death after his nuptials to Margaery Tyrell (known as Purple Wedding, for those who have read the "A Song of Ice and Fire" books). One minute he's slicing a perfectly good book to pieces with a Valyrian steel sword and humiliating his Uncle Tyrion, then expiring before his guests' eyes the next.

As for who poisoned him, that hasn't been revealed yet -- but Joffrey seemed to point to Tyrion (who had filled the wine goblet the king drank from) as he met his very painful-looking death while his mother, Cersei, and everyone else watched. The episode concludes with a distraught Cersei kneeling over her son's body and accusing her brother of the crime. (Tyrion's wife, Sansa Stark, it should be noted, was quietly removed from the scene just as things began to go south for Joffrey.)

Elsewhere in the episode, Roose Bolton returned to Dreadfort and saw for himself what his bastard, Ramsay Snow, has done to Theon Greyjoy -- who now answers to Reek and is so beaten down that when he's ordered to give a close shave (with a very sharp-looking razor blade) to his torturer, he does so without even nicking him. At Ramsay's prompting, Theon/Reek admits to Roose that he didn't actually kill Bran and Rickon Stark -- just two poor farm boys he burned beyond recognition so no one would know the difference -- and that if one wanted to look for the boys (to kill them for real), Castle Black would be a good place to start because that's where their half-brother, Jon Snow, is. And even if the boys aren't there, Ramsay notes, Jon Snow is still half a Stark.

On Dragonstone, Stannis Baratheon and Melisandre watch a ceremony sacrificing three men to the Lord of Light, "cleansing" them of their sins by burning them to death. The red priestess also goes to speak with Stannis' daughter, telling her that all the stories she knows of the seven gods, seven heavens and seven hells are untrue, and that there is only the Lord of Light and Lord of Darkness.

And in King's Landing before the big wedding, Jaime Lannister is trying to train up his left and only remaining hand with some top-secret sword-fighting lessons -- lest anyone know the Kingslayer can't slay much of anything these days. And Tyrion dished out some tough love to Shae to push her away, fearing she is no longer safe after Cersei became aware of their relationship. He yells at her about being a whore and how many men's she's been with, and how he's enjoyed his time with her but is married now and Sansa is better fit to bear his children. He doesn't mean any of these things, but says them -- and crushes her -- so she'll get on a ship he's arranged to take her away to a new life in Pentos.

All of which then brought us to the wedding ceremony (which also featured an icy conversation between Tywin and Cersei Lannister and Prince Oberyn Martell and Ellaria) and the subsequent celebration, which we already detailed above.

Tell us: Were you shocked by Joffrey's death? (Either by the event itself, or, for those familiar with the books, that it happened so early in the season?)