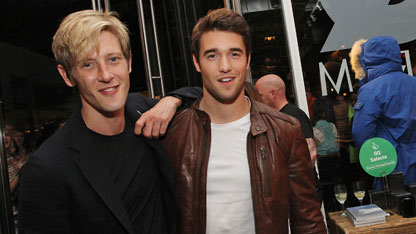 Last night, a little bit of The Hamptons came to Fashion's Night Out when Joshua Bowman and Gabriel Mann, stars of ABC's Revenge, stopped by a VIP party to celebrate the opening of GQ & Nordstrom Men's Pop-Up Store in Soho (open through September 16). And since I'm like a moth to a flame when it comes to all things Revenge, I cornered the boys to find out what we can expect from season two!

"Season 2 of Revenge is out of control," Gabriel told TheInsider.com. "We go hardcore this year. We're not messing around. I mean, how do you top a finale like ours? I guess you have to tie people to poles in the middle of the ocean and attach them to anchors," he says of the recently-released trailer which shows Emily Thorne facing a watery grave. And while death will come for one character in the season premiere, the cast will be growing.

That expanding stable of characters means a slight reduction in workload for Josh, he tells me. "I'm not in as many scenes this season, but what I am getting is so much more exciting. Daniel is more determined, more driven, more focused, less gullible, less of a mama's boy. Which I'm happy about."

The first big addition is Emily's mother, played by Jennifer Jason Leigh -- a casting coup Gabe calls, "amazing." But how positive will her presence be for Emily? "Emily would love nothing more than to find a deep connection in her very bitter, twisted, sociopathic world. And I think Jennifer is the perfect mom for her," Gabe says through a Cheshire Cat grin.

The second big addition to Nolan's storyline is Greek actress Dilshad Vadsaria, who plays Nolcorp employee by the name of Padma. "[Dilshad] is a total pleasure," Gabe says. "She's such a talented actress but she scares me a little bit. She brings the sweet so genuinely that I know they're about to flip her and Padma's about to go pitch black. That's my hypothesis with having seen what this show is capable of ... but you never know – we could live happily ever after! But probably not."

Which led me to wonder if Nolan's flexuality takes a turn towards the ladies this year. "I don't even think Nolan knows if it's truly romantic or it's just manipulation," he says. "[Padma] has genuinely caught Nolan off guard. It's gonna be a doozy!"

Gabriel says heads will begin to spin with the opening moments of the premiere episode, which creator Mike Kelley previously revealed would flashforward to a summer wedding in the Hamptons. When I casually mentioned this, Gabe teased, "You thought that's what it was … but we never stop throwing people for a loop."

He also revealed that in the season premiere, "Nolan will be found in a place you would least expect. Seriously, you'll never be able to guess." But that won't stop us from trying Gabe!

Revenge premieres September 30 at 9 p.m. on ABC. Get all the fall premiere dates here!