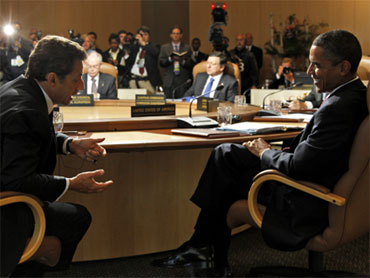 The leaders of the world's eight top industrial democracies on Saturday condemned the alleged sinking by North Korea of a South Korean warship and called on Iran to halt its suspect nuclear program and do more to respect human rights.

The countries — the U.S., Britain, France, Germany, Italy, Canada, Japan and Russia — also called current restrictions on the flow of goods to Gaza "unsustainable." And they sketched out a five-year exit strategy on Afghanistan.

But the joint statement by the so-called Group of Eight powers did not go as far as some nations, including the United States and Japan, wanted.

The statement was released at the end of a meeting in Canada of the eight powers and before a larger group of 20 nations convenes that also includes fast-growing economies like China.

Canadian Prime Minister Stephen Harper told reporters at the conclusion of the G-8 talks that there was a consensus among world leaders that "we can't afford some sort of cataclysmic event" like the collapse of Lehman Brothers in 2008.

"We remain very engaged and very watchful of those situations," he said.

The G-8 discussions took place at a resort in Canada's forested Muskoka lakes region. The leaders took helicopters back to Toronto. President Barack Obama gave British Prime Minister David Cameron a ride in Marine One. The two were scheduled to have one-on-one talks later in the day.

The G-8 leaders turned to foreign policy matters after finding themselves at odds on how to continue to spur world economic growth in the aftermath of the worst recession since the 1930s. The countries were divided over whether to continue government stimulus spending, as the United States wants, or to cut mushrooming deficits, as Europe and Japan want.

On the March sinking of the South Korean warship Cheonan, the leaders cited an independent report that found that the ship had been sunk by a North Korean torpedo. The leaders said: "We condemn in this context the attack which led to the sinking of the Cheonan."

Japanese officials said that the Russians were the only ones in the G-8 to resist tougher language condemning North Korea.

An official in the Russian delegation, who spoke on the condition of anonymity because the leaders were meeting, said that Russia still did not consider the results of the commission to be final and because of this, felt that condemning Pyongyang further could lead to negative consequences.

"We are profoundly concerned by Iran's continued lack of transparency regarding its nuclear activities and its stated intention to continue and expand enriching uranium," the G-8 communique said.

On Iran, the U.S. and European nations are pushing other countries to join them in imposing tough new sanctions on Tehran over its suspect nuclear program, a move that would build on expanded Security Council measures adopted this month. But China and Russia only reluctantly supported those sanctions and have balked at new unilateral steps against Iran.

On Afghanistan, the joint G-8 statement said that a conference in Kabul in July would be an important setting for assessing progress in implementing commitments made in January to train more than 100,000 additional Afghan security forces by the end of next year.

The G-8 leaders said it was important to accelerate efforts to make sure the country's own security forces can "assume increasing responsibility within five years."

Cameron had said in a television interview on Friday that he did not expect British troops — now numbering about 10,000 — to be in Afghanistan in five years' time.

"We can't be there for another five years, having been there for nine years already," he told Britain's Sky News.

South Korea has already referred the ship sinking to the U.N. Security council, which could adopt a resolution condemning the North for the sinking or issue a less stringent presidential statement. Either action would require support from China, North Korea's main ally, and Beijing has thus far resisted. China is a member of the G-20 but not the G-8.

Previous summit gatherings have attracted massive protests by anti-globalization forces. But so far the Canadian protests have been smaller. The largest demonstration, a march in downtown Toronto sponsored by labor unions, was scheduled for Saturday.

Police said before the Saturday march that 32 arrests had been made with security being provided by an estimated 19,000 law enforcement officers drawn from all regions of Canada.

The foreign policy discussions among the leaders of the G-8 took place Saturday after an opening day of talks during which the group failed to resolve a dispute over the proper mix of government spending and deficit reductions needed to keep the global economy on track.

President Obama made the case that the global economy remained fragile and should not be put at risk by countries moving too rapidly to trim their bulging deficits through spending cuts and tax increases, which can slow economic growth.

But leaders of Britain, Germany, Canada and Japan argued that deficit cuts were needed to reassure nervous investors, given the severe market turmoil experienced in May after the near-default of Greece on its huge debt burden.

The G-20 will begin with a dinner Saturday night at the Royal York, one of Toronto's oldest hotels. The topic at dinner will be the state of the global economy.

The G-20 meetings will continue Sunday and will conclude with a joint communique and closing news conferences by various leaders including President Obama.

The G-20 leaders' summit, launched in response to the global financial crisis in the fall of 2008, has now replaced the G-8 as the world's premier forum for discussing and coordinating economic policy.

But Harper said the G-8 leaders had discussed over dinner Friday night the need to continue meetings of the smaller group which he said was more capable of obtaining consensus in crisis situations.

In addition to the group discussions, the leaders were holding a series of one-on-one talks.

President Obama's meeting with Cameron was the first since Cameron took power last month. Those talks were expected to cover the difficulties posed by the BP oil spill, the biggest offshore oil spill in U.S. history.