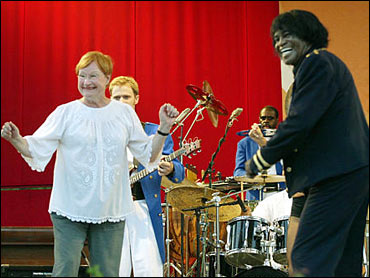 When James Brown was winding down his show at a jazz festival, the crowds clapped to the beat of his 1970's hit "Sex Machine," then roared with approval when Finland's popular president Tarja Halonen walked on stage to jive with the King of Funk.

An enthusiastic audience chanted "Tarja, Tarja, Tarja," in the balmy, bright summer evening Thursday in Pori, on the southwestern coast of Finland, wrapped in a rare heat wave.

Halonen, 59, let her hair down and visibly enjoyed dancing with 70-year-old Brown, who calls himself "the Godfather of Soul," at one of Finland's oldest music festivals.

But the Finnish president — dubbed "Moominmamma" by media — declined to sing.

"Thank you for coming here Mr. James Brown, but I am not a showgirl," she said over the microphone, and stayed on stage to dance with him.

Before the brief dance interlude, Halonen and Brown talked backstage while jazz enthusiasts snapped photos of her.

"Take pictures of him, he's the star," the Ilta-Sanomat tabloid quoted Halonen saying as she pointed at Brown.

Halonen, a belly dancer and keen swimmer, is Finland's first female president. Her popularity has steadily increased since she took office in March 2000 with a poll last month giving her a 94-percent popularity rating, way above her predecessors.

On her first visit abroad as president, Swedish media dubbed her "Moominmamma" after the cuddly moomintroll characters created by the late Finnish writer and artist, Tove Jansson. Like the mother of the white, rotund trolls, she often carries large handbags.

A former left-wing radical known for her down-to-earth manner, Halonen is a former foreign minister and was a lawmaker for 21 years.

She enjoys music and visits several of Finland's annual festivals during the summer months.