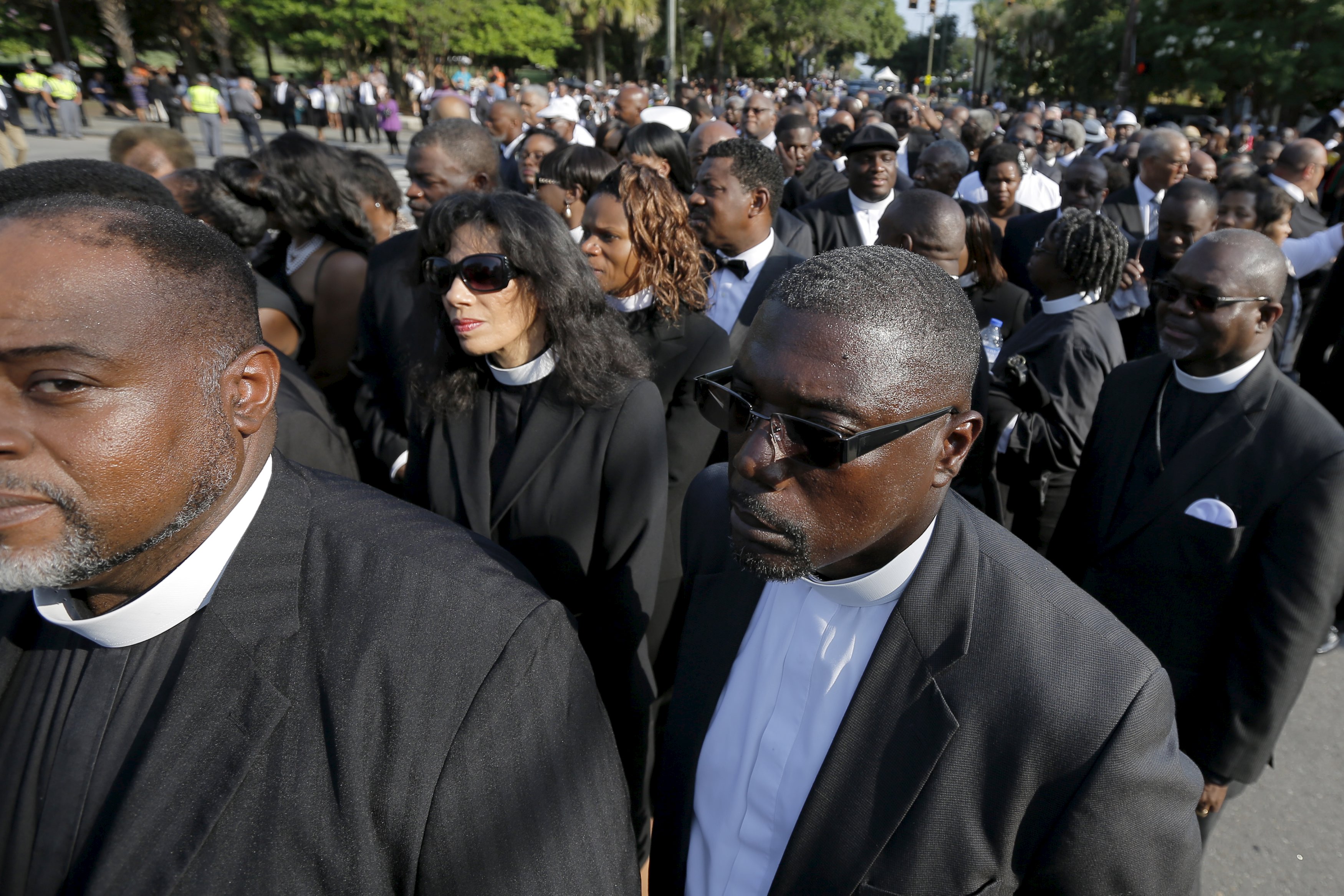 The "Mother Emanuel" choir, hundreds strong, led roughly 6,000 people in a medley of spiritual standards as the funeral for the Rev. Clementa Pinckney began.

"The nation shares in your grief," Mr. Obama said Friday during his eulogy for Pinckney. "What a good man. What an example he set."

Obama received enthusiastic applause and several standing ovations from the crowd of mourners. He also called for an end to the display of the Confederate flag. The shooting suspect was seen in photos displaying the flag.

"By taking down that flag, we express God's grace," he said.

The president wrapped up the four-hour funeral in song, belting out the first chorus of "Amazing Grace" solo before the choir and organist joined in.

State Sen. Gerald Malloy, Pinckey's Senate suitemate and his personal lawyer, promised to take care of his two daughters and keep pressing on issues Pinckney cared about, such as equitable health care and social justice.

Applause rang out as he noted how the slayings have suddenly prompted a reevaluation of symbols that came out of the Civil War and were revived to assert white supremacy during the South's segregation era.

But he also urged the crowd to keep working for the racial and political unity Charleston has experienced since the shootings. After all, he said, Pinckney's last act was to open his church to a stranger.

"Let us not close the doors that Sen. Pinckney gave his life for us to open," he said.

The Justice Department has determined that the shootings inside the Emanuel African Methodist Episcopal Church meet the legal requirements for a hate crime and federal charges are likely, a federal law enforcement source told The Associated Press on Thursday, speaking on condition of anonymity because the investigation is ongoing.

Metal detectors, bag searches and the visible presence of Secret Service agents throughout the arena at the College of Charleston added to heightened sensibilities at Friday's service, another wrenching but cathartic occasion for the community to say goodbye.

"I'm here to hear Obama speak hopefully on racism, forgiveness and justice," said Wannetta Mallette, of North Charleston, where a white police officer faces murder charges in the shooting of an unarmed black man. "I think everyone is here to share in the grief and sorrow," she said.

Also attending the funeral were first lady Michelle Obama, Vice President Joe Biden and his wife, Jill. Democratic presidential candidate Hillary Clinton was there, too, along with dozens of state and federal lawmakers.

A viewing center at the Charleston Museum also was at capacity, and the service was broadcast live around South Carolina.

Jacob Reid of Summerville woke his two daughters at 4 a.m. to make the drive to honor his friend.

"The Rev. Pinckney really inspired them," he said. "He was a gentleman, easy to talk with. Very humble."

The revelation that Dylann Storm Roof had embraced Confederate symbols before the attack, posing with the rebel battle flag and burning the U.S. flag in photos posted online, has prompted a stunning reversal of long-held positions.

Gov. Nikki Haley moved first, asking lawmakers Monday to bring down the flag outside South Carolina's Statehouse. Other politicians leaped through that opening in the days since, saying that such historic but divisive symbols no longer deserve places of honor.

Some authorities have worried openly about people taking matters into their own hands.

"Black Lives Matter" has been spray-painted on monuments around the South. Police are also investigating arson attacks against two African-American churches - in Charlotte, North Carolina; and Macon, Georgia.

In Charleston, gestures of forgiveness by the victims' families when the 21-year-old suspect appeared on murder and gun charges last Friday set a healing tone.

Attorney Boyd Young, who represents Roof's family, issued a statement saying they will answer questions later, but want to allow the victims' families to grieve. "We feel it would be inappropriate to say anything at this time other than that we are truly sorry for their loss," the statement said.

The first two funerals, for Ethel Lance and Sharonda Coleman-Singleton, were held Thursday, with tight security and emotional responses to the eulogies and hymns.

Amazon Prime members now get Grubhub+ free for one year