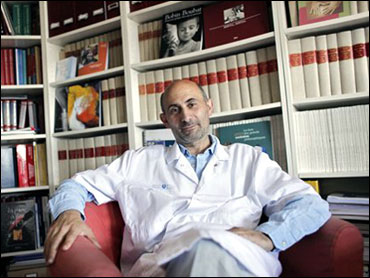 A French surgeon said Thursday he has conducted a full-face transplant including eyelids and tear ducts, in a rare operation on a 35-year-old man with a genetic disorder.

Rivals called the French operation, similar to one carried out in Barcelona in April, a new achievement that further advances efforts to provide faces - and new lives - for the disfigured.

Lantieri said the procedure was carried out June 27 at the Henri Mondor hospital in the Paris suburb of Creteil. Neither Lantieri nor the hospital would give further details about the operation, the patient or the donor.

Lantieri claimed it was the first of its kind involving so many different parts of the face.

The hospital said the operation was the 12th face transplant worldwide since the first conducted in France in 2005, on the nose, mouth and chin of a woman disfigured by a dog attack.

Such operations remain quite rare and complex, though they have gained acceptance in recent years.

A team of surgeons at the Vall d'Hebron Hospital in Barcelona, Spain, said they carried out the world's first full-face transplant in April on a young Spanish farmer unable to breathe or eat on his own since accidentally shooting himself in the face. Doctors lifted the jaw, nose, cheekbones, muscles, teeth and eyelids from a donor and placed it masklike onto the man.

A near-total face transplant was carried out in Cleveland in 2008, on a woman who was also shot in the face.

Neil Huband, a spokesman for the UK Facial Transplantation Research Team, based at the Royal Free Hospital in London, congratulated France's Lantieri on a "considerable achievement."

"What does it matter if this is a first, if it gives someone a new life," he said.

"This proves that for a small number of people, this is an entirely proper and valid and successful operation," he said.

When you have a facial injury or disorder, "you walk down the street and you have people who shy away from you, you are called names," he said.

Rejection is a risk for the facial transplant patient, as whenever someone receives an organ or cells from someone else, because the body regards this as foreign tissue.