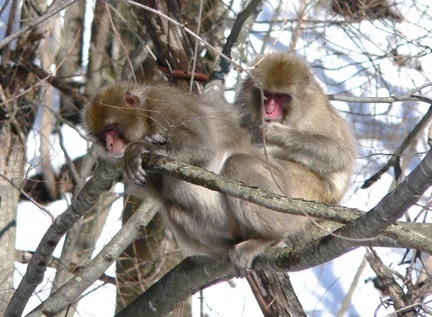 Wild monkeys living in forests of Fukushima -- the Japanese city that was the site of a nuclear power plant meltdown in 2011 -- have lower blood cell counts than monkeys from northern Japan, and carry detectable levels of cesium in their bodies, researchers have found.

The researchers studied blood changes and signs of radiation exposure in 61 monkeys living 43 miles (70 kilometers) from the Fukushima Daiichi nuclear power plant, about one year after an earthquake and tsunami struck the region in 2011, causing a meltdown of three of the plant's reactors, which released a large amount of radioactive material into the environment.

The results showed Fukushima monkeys had lower counts of red and white blood cells, and other blood parts compared with 31 monkeys from Shimokita Penisula in northern Japan. The researchers also found radioactive cesium in the muscles of Fukushima monkeys, ranging from 78 to 1778 becquerels (units of radioactivity representing decay per second) per kilogram, but they didn't find any in Shimokita monkeys. [7 Craziest Ways Japan's Earthquake Affected Earth]

Exposure to radioactive materials may have contributed to the blood changes seen in Fukushima monkeys, study researchers Shin-ichi Hayama and colleagues wrote in their study, published today in the journal Scientific Reports. Low blood cell counts could be a sign of a compromised immune system and could potentially make the monkeys vulnerable to infectious diseases, the researchers said.

"The findings are consistent with what our group had found with red blood cells and hemoglobin content for children living around Chernobyl," said Tim Mousseau, a biologist at University of South Carolina, who wasn't involved with the study.

The Chernobyl nuclear power plant in Ukraine exploded in 1986. Research on the aftermath of the disaster found concerning effects of radiation exposure on people, animals, insects and plants. The new study of Fukushima monkeys indicate the Japanese plant's meltdown could have similarly negative consequences.

"The fact that they are seeing a signal in monkeys living in Fukushima city means that there's some potential direct relevance to the human population," Mousseau told Live Science. "These monkeys are living at levels of contamination that are very similar to what many of the people are also living in."

In Fukushima, researchers have so far seen significant abnormalities in butterflies and strong effects on bird populations following the leaked radioactive material.

"Whether these effects will persist into the future, whether they increase or decrease, nobody really knows," Mousseau said. [In Photos: Fukushima Butterflies Plagued With Defects]

The study researchers also found that among juvenile monkeys, those with higher radioactive cesium concentrations in their muscles showed lower white blood cell counts. These findings suggest that younger monkeys may be more vulnerable to radioactive materials, the researchers said.

The levels of radioactive cesium found in Fukushima monkeys are higher than what is being reported for the human population in the area, Mousseau said.

"It may be because monkeys are eating the fruits, mushrooms and insects that are quite contaminated, so they are probably getting a much larger exposure than people who are eating relatively uncontaminated food," Mousseau said.

However, it is difficult to determine how dangerous the levels are, because the effects of exposure to radioactive cesium are not well known, and more studies are needed to understand this and other consequences of radioactive material in the environment Mousseau said.

"It's really surprising how little research is being supported, given the important questions that can be answered by this research, the implications for human populations in the area, as well as the potential utility of such research for any future nuclear accident that might occur."

More research will be needed to confirm that the low blood counts in Fukushima monkeys are, in fact, caused by exposure to radiation, Mousseau said. The researchers have ruled out infectious disease or malnutrition as the cause of blood changes in the Fukushima monkeys, but it is still possible that their lower blood cell counts are simply random variations among populations of monkeys, Mousseau said.