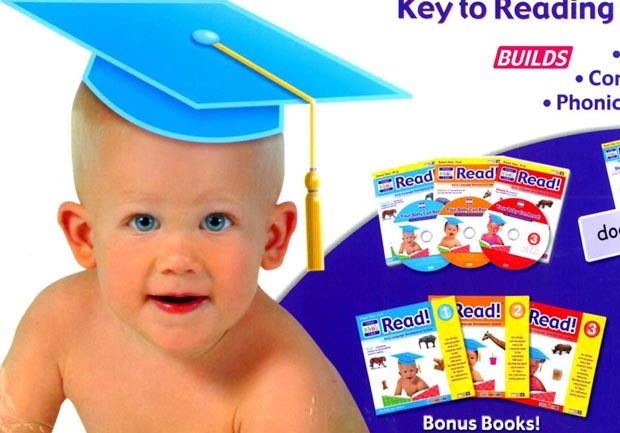 (CBS/AP) WASHINGTON - Many babies at 9 months old are just starting to stand up. Some take their first steps. But, reading? At 9 months? Really?

The agency has filed a complaint against the man behind the "Your Baby Can Read" program, Robert Titzer. The FTC accuses him of false and deceptive advertising for promoting his program in ads and product packaging as a tool to teach infants as young as nine months to read.

The "Your Baby Can Read" program used a combination of videos, flash cards and pop-up books and was advertised extensively on television, YouTube, Facebook (FB) and Twitter. It cost about $200 and was sold nationwide at retails stores, including Walmart (WMT) and Babies R Us.

The company Your Baby Can and its president and chief executive until March 2010, Hugh Penton Jr., also were named in the complaint. Both have agreed to settle the charges, the FTC said in a statement on Tuesday.

Your Baby Can Read going out of business

Titzer and Your Baby Can said previously that the company had "scientific studies" to back up its claims. The FTC says those studies were flawed.

"The settlement with Penton and Your Baby Can, LLC prohibits the Carlsbad, California-based defendants from further use of the term 'Your Baby Can Read.' The settlement also imposes a $185 million judgment, which equals the company's gross sales since January 2008," the FTC said.

The company, based in Carlsbad, Calif., announced earlier this year that it was going out of business. It cited the high cost of fighting complaints alleging that its ads were false.

Titzer, an educator with a doctorate in human performance from Indiana University, developed the program and appeared in many of the ads promoting the Your Baby Can Read videos and program. He was billed as a "recognized expert in infant learning."

Boston-based Campaign for a Commercial-Free Childhood filed a complaint about "Your Baby Can Read" with the commission in April 2011. The advocacy group has led a series of campaigns against what critics call the "genius baby" industry.

CCFC's director, Susan Linn, called the FTC action "an important victory for children and families and for anyone who believes that advertisers should be held accountable for deceiving consumers. There is simply no evidence that screen media is beneficial for babies."

The company had said more than a million families have used the "Your Baby Can Read" products. One 30-minute television infomercial featured home video of a 2-year-old girl who used the program and was purportedly reading a page from the children's book, "Charlotte's Web."