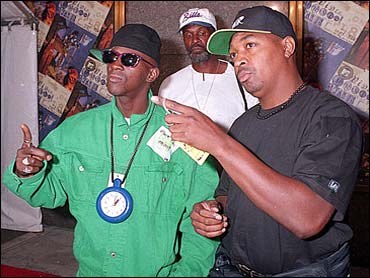 Astronaut Neil Armstrong's first words from the moon, speeches by President Wilson and Gen. Douglas MacArthur and songs by Al Jolson, Muddy Waters and Nirvana are among 50 recordings being added to the Library of Congress' National Recording Registry.

The discovery of a previously unknown recording by jazz masters Thelonious Monk and John Coltrane was also announced Tuesday.

There's plenty of music, from Victor Herbert's "Gypsy Love Song" of 1898, through Glenn Miller's "In the Mood" in 1939, to Nirvana's 1991 album "Nevermind." Performances must be 10 years old to qualify. This is the third group of recordings to be added to the registry.

The newly discovered performance by pianist Monk and saxophonist Coltrane at Carnegie Hall was never commercially recorded, the library said. The collaboration is not one of the 50 recordings being added to the registry.

News broadcasts being inducted include Wilson's speech of Nov. 11, 1923, celebrating the fifth anniversary of the armistice that ended World War I. It is the earliest surviving recording of a regular news broadcast.

Other inductees include an NBC broadcast of Charles Lindbergh's arrival and reception in Washington after his solo flight to Paris in 1927; an Edward R. Murrow broadcast from a London rooftop during the Battle of Britain in 1940, and MacArthur's "Old soldiers never die" speech in 1951 after President Truman recalled him from duty in the Korean War.

One of the odder selections is a collections of sounds made by Asian elephants. Some of the elephant sounds are infrasonic — inaudible to the human ear — but were nevertheless recorded by Katharine Payne of Cornell University in 1984.

Outer space buffs can listen to Armstrong's famous "one small step for man" speech from the moon in 1969 — and follow that up with John Williams' soundtrack to the 1977 movie "Star Wars."