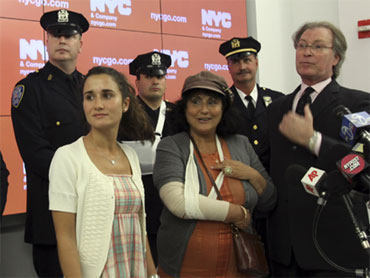 Five French tourists got a harrowing start to their New York visit: a wild police chase.

As they looked for a ride at the Air France terminal at John F. Kennedy International Airport on Tuesday morning, the visitors were lured to a van that was not licensed to provide taxi service, Port Authority of New York and New Jersey spokesman John Kelly said.

Plainclothes police recognized the man who enticed the tourists, Ian McFarland, as a repeat offender previously arrested for corralling passengers into unlicensed cars. A Port Authority officer reached inside the van to try and grab the keys, but the driver, Khaalif Preacher, sped off with the tourists inside, knocking the officer to the ground, Kelly said.

Port Authority police sped after the van, which snaked through residential streets and traveled about seven miles through two boroughs before it crashed through a gate at a U.S. Postal Service facility in the East New York section of Brooklyn.

The tourists said they screamed and prayed during the chase.

"I was scared," Paris resident Esther-Ethy Mamane, 26, said Wednesday at a news conference. Mamane and her mother, Claudie, traveled to New York to attend a religious seminar. She said she tried to keep the other passengers inside the van calm during the chaos.

Preacher and McFarland jumped out while the van was still moving. Mamane said there was smoke and the rear doors wouldn't open from the inside, so she jumped out the front as the van rolled and ran around to open the doors. Mamane's mother tried to jump from the van, fell and the vehicle rolled over her arm. She was treated at a hospital and released. Mamane and the other passengers, a woman and her parents, were not injured.

Meanwhile, police chased the two suspects on foot and arrested them. They were awaiting arraignment Wednesday on charges of second-degree assault, second-degree assault on an officer, reckless endangerment, resisting arrest and unlawful solicitation of ground transportation services, the Queens district attorney's office said. It wasn't clear whether they had attorneys.

Claudie and Esther-Ethy Mamane were given a bag full of New York City goodies, including tickets to the Broadway show "Chicago," passes to the Museum of Modern Art and transit fare cards at a news conference Wednesday. The other tourists decided not to attend.

The women, who spoke little English, said they were grateful to the Port Authority officers who never let the van out of their sight, and they are looking forward to a good trip in New York.

"We are happy to be here; we love New York and New Yorkers," Claudie Mamane said through a French translator. "We never lost faith. And at any time we never thought it would end badly for us."