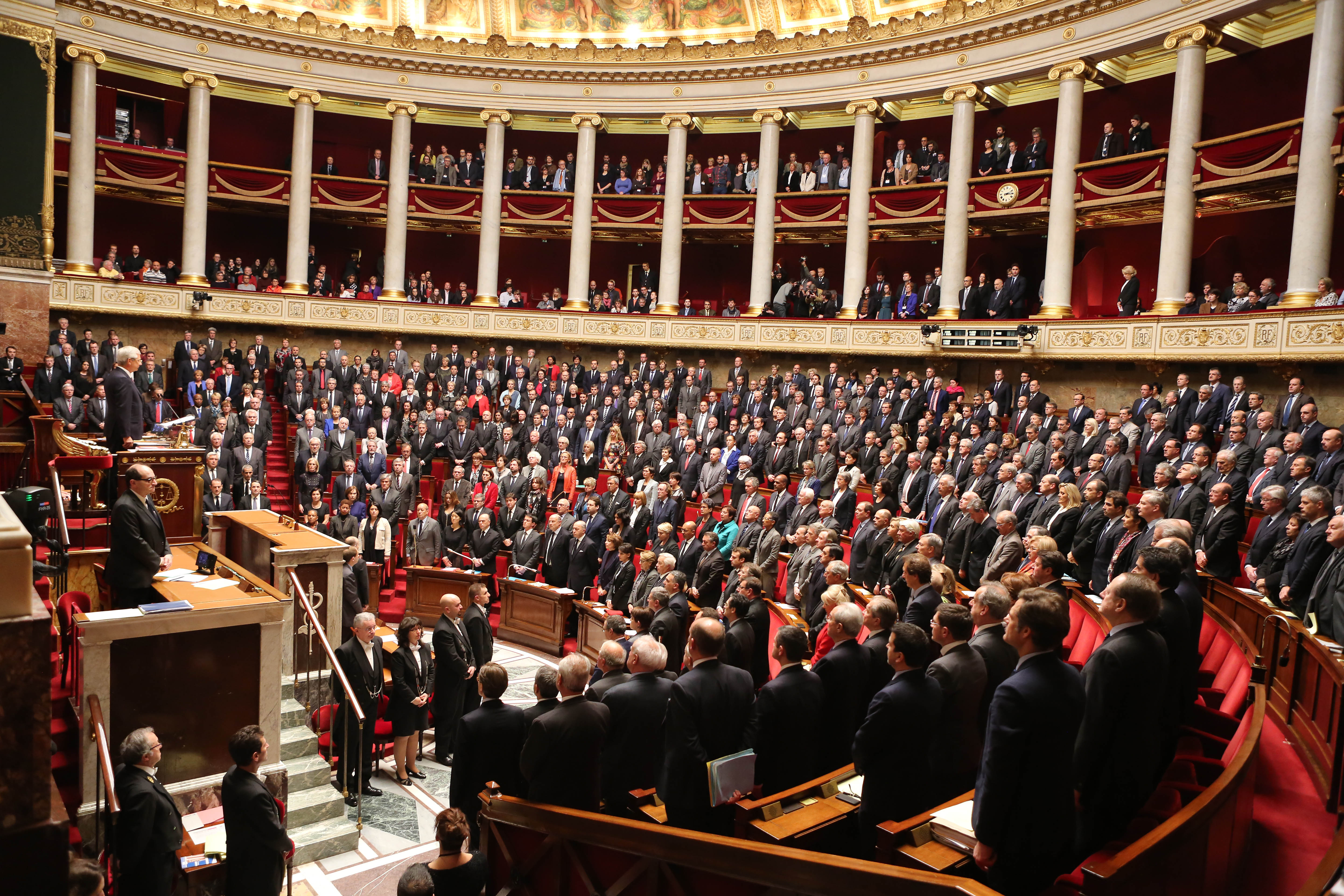 PARIS - France ordered prosecutors around the country to crack down on hate speech, anti-Semitism and those glorifying terrorism and announced Wednesday it was sending an aircraft carrier to the Middle East to work more closely with the U.S.-led coalition fighting the Islamic State in Iraq and Syria.

Authorities said 54 people had been arrested for hate speech and defending terrorism since terror attacks killed 20 people in Paris last week, including three gunmen. The crackdown came as Charlie Hebdo's defiant new issue sold out before dawn around Paris, with scuffles at kiosks over dwindling copies of the satirical weekly that fronted the Prophet Muhammad anew on its cover.

President Francois Hollande, speaking aboard the Charles de Gaulle aircraft carrier to members of the military, said the situation "justifies the presence of our aircraft carrier."

A top leader of Yemen's al-Qaida branch claimed responsibility Wednesday for the Charlie Hebdo massacre that left 12 dead at the paper, saying in a video the massacre came in "vengeance for the prophet." The newspaper had received repeated threats previously for posting caricatures of Muhammad.

A high-ranking French intelligence official told The Associated Press on Wednesday that authorities see the claim as "opportunistic" and that AQAP appears to have served as an inspiration instead of orchestrating the attacks. The official spoke on condition of anonymity to be able to discuss sensitive intelligence matters.

U.S. intelligence officials, however, said they have no evidence AQAP coordinated the attack or knew about it in advance. They spoke on condition of anonymity because they weren't authorized to discuss classified matters publicly.

Since the attacks, France has deployed 10,000 troops and 120,000 security forces in an area the size of Texas to protect sensitive sites, including Jewish schools and synagogues, mosques and travel hubs. French police say as many as six members of the terror cell may still be at large.

France has been tightening security and searching for accomplices since the terror attacks began, but none of the 54 people mentioned Wednesday have been linked to the attacks. That's raising questions about whether Hollande's Socialist government is impinging on the very freedom of speech that it so vigorously defends when it comes to Charlie Hebdo.

Among those detained for a Facebook posting was Dieudonne, a popular and controversial comic who has repeated convictions for racism and anti-Semitism. He was later released and will be put on trial next month for justifying terrorism, a judicial official said on condition of anonymity in keeping with French custom.

Like many European countries, France has strong laws against hate speech, especially anti-Semitism in the wake of the Holocaust.

The Justice Ministry sent a letter to all French prosecutors and judges urging more aggressive tactics against racist or anti-Semitic speech or acts. The order did not mention Islam.

The core of Charlie Hebdo's staff died a week ago when gunmen stormed its offices, igniting three days of bloodshed around Paris that left 17 victims dead. The attacks ended Friday when security forces killed both Charlie Hebdo gunmen -brothers Cherif and Said Kouachi - and an accomplice - Amedy Coulibaly - who killed a policewoman and later four hostages at a kosher grocery.

Working out of borrowed offices, the Charlie Hebdo employees who survived put out a new weekly issue Wednesday. Its 50,000 copies ran out nearly immediately. Due to the high demand, the print run was increased to 5 million, according to spokeswoman Anne Hommel - 100 times the usual circulation. Kiosk operators in Paris told people to return Thursday for a second run.

Media watchdog Reporters Without Borders said Google is among many companies and individuals who donated money to produce this week's edition of Charlie Hebdo. The issue was distributed in 18 countries outside France and translated into other languages.

Many Muslims believe their faith forbids depictions of the prophet, and reacted with dismay - and occasionally anger - to the latest cover image. Some who had supported Charlie Hebdo after the terror attacks felt betrayed and others feared the cartoon would trigger yet more violence.

The publication raised tensions in Turkey, and caused huge crowds and frenzied eBay bidding in some European countries.

In its message to prosecutors and judges, France's Interior Ministry said it was issuing the crackdown on hate speech order to protect freedom of expression from comments that could incite violence or hatred. It said no one should be allowed to use their religion to justify hate speech.

The government order warned authorities to be particularly attentive to any incidents that could lead to urban unrest or violence against police. That suggests the government fears new riots like the wave which swept through France's neglected housing projects and immigrant communities a decade ago.

The government is writing broader new rules on phone-tapping and other intelligence to fight terrorism, spokesman Stephane Le Foll said. It also is launching a deeper project to rethink France's education system, urban policies and integration model, in an apparent recognition that the terror attacks exposed deeper problems about inequality in France, especially at its housing projects.

Dieudonne, a comic who popularized an arm gesture that resembles a Nazi salute and who has been convicted repeatedly of racism and anti-Semitism, is no stranger to controversy. His provocative performances were banned last year but he has a core following among France's disaffected youth.

The comic wrote an open letter to France's interior minister. "You are looking for a pretext to forbid me. You consider me like Amedy Coulibaly when I am not any different from Charlie," he wrote.

Coulibaly had claimed allegiance to the Islamic State group, while the Kouachi brothers told survivors they were sent by al-Qaida in Yemen.

Defending his caricature of Muhammad on Charlie Hebdo's latest cover, cartoonist Renald Luzier argued that no exceptions should be made when it comes to the freedom of expression.

He said when the weekly was threatened before, the reaction was often: "Yes, but you shouldn't do that (publish cartoons of Muhammad). Yes, but you deserved that."

"There should be no more 'Yes, but," he insisted.

Prime Minister Manuel Valls displayed a copy of the satirical paper as he left a Cabinet meeting Wednesday but his hand carefully covered Muhammad's face.