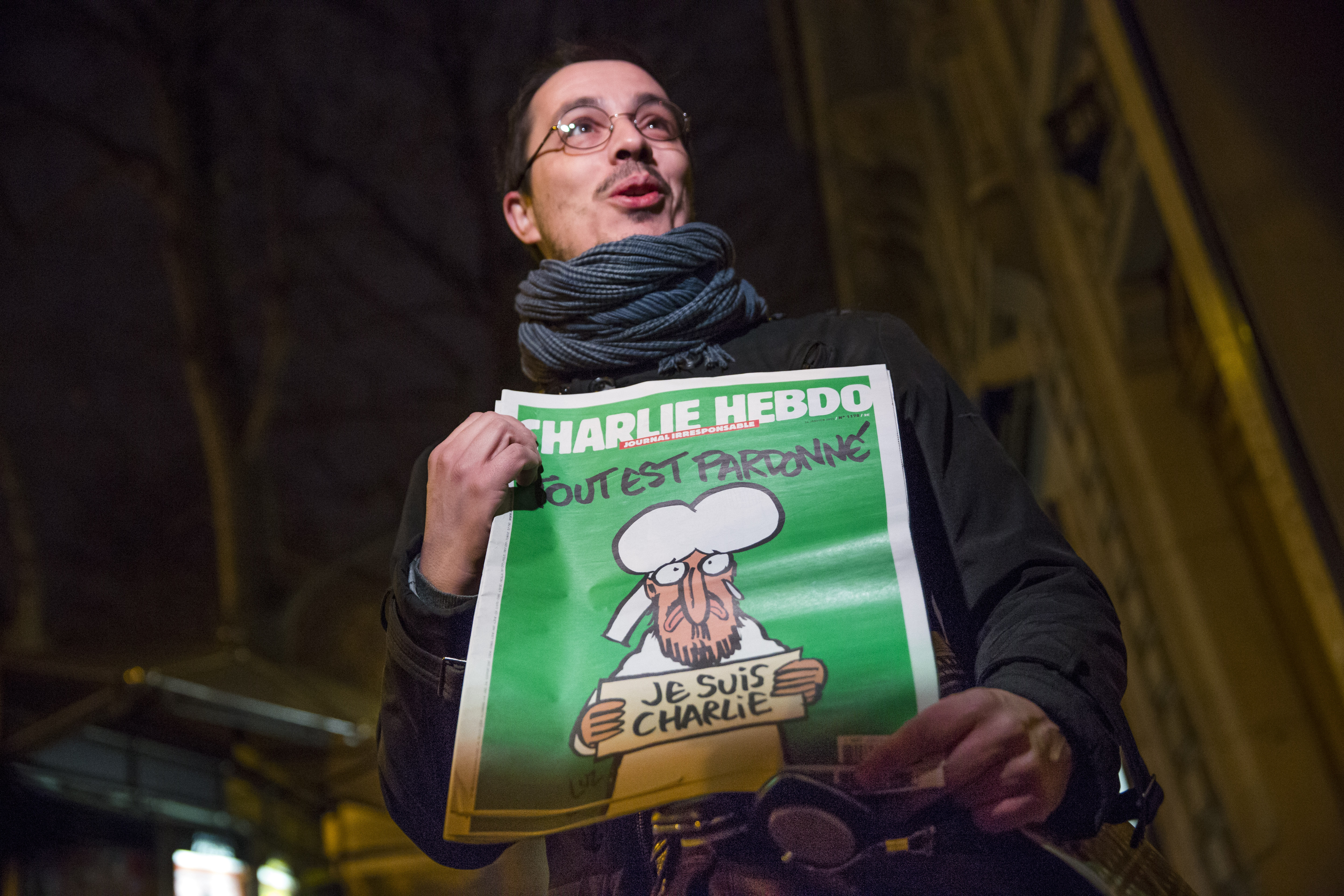 PARIS -- Charlie Hebdo's defiant new issue sold out before dawn around Paris, and still people were lining up at kiosks in case of a spare copy of the paper fronting the Prophet Muhammad.

The core of the irreverent newspaper's staff perished a week ago when Islamic extremists linked to al Qaeda's Yemen branch stormed its offices, killing 12. Those who survived put out the issue that appeared on newsstands Wednesday, working out of borrowed offices, with a print run of 3 million -- more than 50 times the usual circulation.

As the newspapers went on sale, a new video statement released by al Qaeda in the Arabian Peninsula (AQAP) claimed the group had planned and funded the attack as revenge for the publication of images of the Prophet.

One newsstand just off Paris' Champs Elysee sold out at 6:05 a.m. -- five minutes after opening. At Saint-Lazare, people hoping to buy a copy scuffled when they realized there weren't enough to go around.

Charlie Hebdo announced that it would print an additional 2 million copies of the latest edition for distribution by Thursday to meet the huge demand, reports CBS News' Elizabeth Palmer.

Copies of the paper were already getting bids Wednesday morning on eBay into the hundreds of dollars.

The newspaper appeared as France's government prepared strict new anti-terror measures, and as the search continued for as many as six people thought to be linked to the suspects, French-Algerian brothers Said and Cherif Kouachi, who were killed on Friday in a police raid on a business northeast of Paris.

Here's a look at some of the global reaction to the new Charlie Hebdo issue:

Many Muslims believe their faith forbids depictions of the prophet, and reacted with dismay - and occasionally anger - to the latest cover image. Some felt their expressions of solidarity with Charlie Hebdo after last week's attack had been rebuffed, while others feared the cartoon would trigger yet more violence.

"You're putting the lives of others at risk when you're taunting bloodthirsty and mad terrorists," said Hamad Alfarhan, a 29-year old Kuwaiti doctor.

"I hope this doesn't trigger more attacks. The world is already mourning the losses of many lives under the name of religion."

Abbas Shumann, deputy to the Grand Sheik of Cairo's influential Al-Azhar mosque, said the new image was "a blatant challenge to the feelings of Muslims who had sympathized with this newspaper."

But he told The Associated Press that Muslims should ignore the cover and respond by "showing tolerance, forgiveness and shedding light on the story of the prophet." An angry reaction, he said, "will not solve the problem but will instead add to the tension and the offense to Islam."

In Lebanon, the Shiite Muslim militant group Hezbollah said the depiction was "a provocation of the feelings of more than 1.5 billion Muslims in the world ... and directly contributes to supporting terrorism, fanaticism and extremists."

In Jordan, the Muslim Brotherhood said it would stage a protest after Friday prayers in Amman in response to the paper's Muhammad cartoon. Spokesman Murad Adaileh said the brotherhood strongly condemned both the killings and the "offensive" against the prophet.

That was a widely expressed sentiment. Ghassan Nhouli, a grocer in the Lebanese port city of Sidon, said the magazine and the killers "are both wrong."

The Iranian government has strongly condemned the killings, but Foreign Minister Mohammed Javad Zarif said that in a world of widely differing cultures, "sanctities need to be respected."

"I think we would have a much safer, much more prudent world if we were to engage in serious dialogue, serious debate about our differences and then what we will find out that what binds us together is far greater than what divides us," he said.

Egyptian cartoonist Makhlouf appealed for peace with his own spin on the Charlie Hebdo cover, replacing Muhammad with an ordinary Middle Eastern man carrying a placard reading "I am an artist" in French.

"I am for art and against killing," he added in Arabic. "May God forgive everyone." The image was widely circulated on social media.

Turkey was rare among Muslim-majority nations to have publications running Charlie Hebdo images. But the decision has raised tensions in the officially secular country.

A Turkish ordered a ban on access to websites showing Charlie Hebdo's Muhammad cover, and police stopped trucks leaving the printing plant of newspaper Cumhuriyet after it said it would reprint some of the cartoons Wednesday. The vehicles were allowed to distribute the paper once officials had determined that the image of the Prophet Muhammad was not shown.

The paper printed a four-page selection of cartoons and articles - including caricatures of Pope Francis and French President Francois Hollande - but left out cartoons likely to offend Muslims. However, two Cumhuriyet columnists used small, black-and-white images of the new Charlie Hebdo cover as their column headers.

A small group of pro-Islamic students staged a protest outside the paper's office in Ankara, the state-run Anadolu Agency reported, and police intensified security outside Cumhuriyet's headquarter and printing center.

No luck in New York

The latest edition of Charlie Hebdo may well have been the hottest unavailable item in New York, as phones at magazine and newspaper vendors rang off the hook with thousands of inquiries.

"This is all I'm doing today!" said Ami Patel, owner of the Around the World magazine and book store near Times Square - one of the city's biggest purveyors of foreign publications.

"There's a phone call every minute, plus walk-ins," said Patel, who could barely finish a sentence before another call came in.

It was a similar story at other magazine sellers; even the New York-based cultural division of the French Embassy said it had not yet received any copies.

Across Europe, there was high demand for scarce copies of the latest edition, and several newspapers ran extracts from Charlie Hebdo.

Spain's El Pais published two pages of the cartoons with Spanish translation, though it did not include any images of the prophet.

A small Italian newspaper, Il Fatto Quotidiano (The Daily Fact), published Charlie Hebdo as a 16-page supplement, in French with Italian translations of the captions.

"Why are we doing it?" editor Antonio Padellaro wrote in a front-page column. "Because last Friday, when we called the surviving top editor of Charlie Hebdo, we heard him say, 'Thanks, you're the only Italian newspaper who asked us.'"

Physical copies of the paper were hard to find, though newsagents in several countries said they hoped to have some in stock by the end of the week.

In Sweden, the 320-strong Pressbyran chain of newsagents said it would sell the issue, but only online, not in stores. Spokesman Fredrik Klein said the decision was "as a security measure and out of concern for our staff."

There was brisk bidding for copies of Charlie Hebdo on Internet auction sites. On the Irish version of eBay, emailed electronic copies were selling at prices starting around 6.50 euros ($8), while hard copies attracted bids over 200 euros ($240). On British eBay, bidding on one copy went above 95,000 ($145,000), though it was unclear whether the bids were genuine or an attempt to make mischief.

Michael Collingwood of Sgel, Charlie Hebdo's Spanish distributor, said he normally received 40 copies but had been promised 1,000 this time by the paper's French distributor. He figured he could sell eight times that number.

"I don't know why they only printed 3 million," he said. "Everyone wants it."