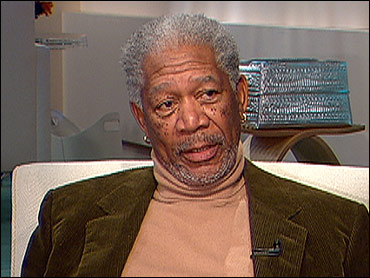 Morgan Freeman remained in serious condition Tuesday with a broken arm and elbow after rescuers used a jaws-of-life machine to free him and a passenger from their car after it crashed on a stretch of rural Mississippi Delta highway this weekend.

Freeman, 71, and Demaris Meyer, 48, of Memphis, Tenn., were taken to the Regional Medical Center in Memphis following the accident in Tallahatchie County on Sunday night.

State troopers said the car careened off the highway and overturned twice before landing upright in a ditch.

"He has a broken arm, broken elbow and minor shoulder damage but he is in good spirits," Freeman's rep, Donna Lee, said in a statement Monday afternoon. "He is going to have surgery this afternoon or tomorrow to correct the damage. He says he'll be OK and is looking forward to a full recovery."

Lee said "The Dark Knight" star is expected to make a full recovery.

Kathy Stringer, a spokeswoman at the Memphis hospital about 90
miles north of the accident, said Tuesday that no information,
other than the listing of serious, would be released about Freeman.

Bill Luckett, a business partner with Freeman in the Ground Zero Blues Club chain, told The Commercial Appeal in Memphis that Meyer, whom he described as a friend, was "in better condition than Morgan."

"There's no indication that either alcohol or drugs were involved," Williams said. He said both Freeman and Meyer were wearing seat belts. The woman's condition was not immediately available.

Freeman was airlifted to the hospital in Tennessee. It wasn't clear whether Meyer was being treated at the same hospital.

Clay McFerrin, editor of Sun Sentinel in Charleston, said he arrived at the accident scene on Mississippi Highway 32 soon after it happened about 4 miles west of Charleston, not far from where Freeman owns a home with his wife.

McFerrin said it appeared that Freeman's car was airborne went it left the highway and landed in a ditch.

The WREG-TV Web site reported Freeman may have fallen asleep at the wheel.

"They had to use the jaws of life to extract him from the vehicle," McFerrin said. "He was lucid, conscious. He was talking, joking with some of the rescue workers at one point."

McFerrin said bystanders converged on the scene trying to get a glimpse of the actor.

When one person tried to snap a photo with a cell phone camera, Freeman joked, "no freebies, no freebies," McFerrin said.

"I'm definitely concerned," country singer and fellow Mississippian Steve Azar, whose video for his hit "Waitin' on Joe" featured Freeman, said Monday. The two have also worked charity events together. "He's been the best ambassador our state has ever had.

"He could live anywhere in the world and he came back home. I just think it shows a lot about him as a person and how grounded he is."

The hospital where Freeman is being treated is commonly known as The Med, and is an acute-care teaching facility that serves patients within 150 miles of Memphis.

The popular actor, with his commanding voice and calm demeanor, has grown into one of the most respected figures in modern cinema. He is currently appearing in the blockbuster film "The Dark Knight," the latest in the Batman series.

He was born in Memphis, Tenn., but spent much of his childhood in the Mississippi Delta. He is a co-owner of the Ground Zero Blues Club in Clarksdale, Miss.