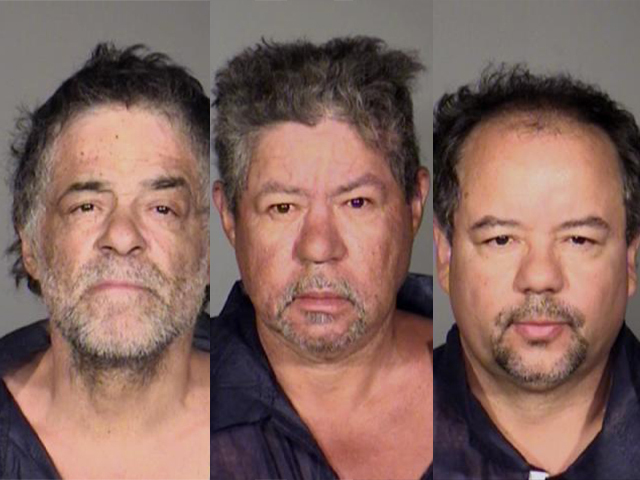 CLEVELAND The woman's voice was frantic and breathless, and she was choking back tears. "Help me. I'm Amanda Berry," she told a 911 dispatcher. "I've been kidnapped and I've been missing for 10 years and I'm, I'm here, I'm free now."

Those words led police to a house near downtown Cleveland where Berry and two other women who vanished about a decade ago were found Monday, elating family members and friends who had longed to see them again.

Authorities later arrested three brothers. One of them, Ariel Castro, aged 52 and a former school bus driver for Cleveland schools, owned the home, situated in a poor, rundown neighborhood dotted with boarded-up houses. No immediate charges were filed. His brothers were identified as Onil Castro, 50, and Pedro Castro, 54

City Safety Director Martin Flask said Tuesday that investigators had no record of any tips or calls about criminal activity at the house in the years after the victims vanished, but were still checking their police, fire and emergency databases.

Police Chief Michael McGrath said he thinks Berry, Gina DeJesus and Michelle Knight were held in the house since they were in their teens or early 20s.

A 6-year-old also was found in the home, and Cleveland police Deputy Chief Ed Tomba said Tuesday that the girl is believed to be Berry's daughter. He declined to say who the father was or where the child was born.

The women appeared to be in good health and were taken to a hospital to be evaluated and reunited with relatives. A photo released by Berry's family showed her smiling with an arm around her sister.

CBS affiliate WOIO in Cleveland reports they had been released on Tuesday morning. Cleveland police Commander Keith Sulzer said the three women were taken to an undisclosed location in the Cleveland suburbs. Officials said they want to give the women time to recover before debriefing them.

Authorities declined to say whether the women were restrained or if any of them had been sexually assaulted. Police said they were trying to be delicate in their questioning of the women, given the trauma they endured.

Their ordeal may have been severe, according to what sources told WOIO-TV. Two of the women were often held in the basement, and one woman in a room upstairs. Law enforcement sources have told WOIO that one of the rooms had chains hanging from the ceiling. One woman allegedly told police she had gotten pregnant more than once, but her captor beat her and she ended up losing the babies.

Their rescue began late Monday when neighbor Anna Tejeda was sitting on her porch with friends when they heard someone across the street kicking a door and yelling. One of her friends, Charles Ramsey, walked over to investigate.

"She said, 'Help me get out.' So I'm looking at her and I'm like, 'What's wrong with you?' She said 'We been in here for a long time.' So I pried the door and one of my friends helped me and she kicked the bottom of the door while she came up," Ramsey told WOIO-TV. "I didn't know who she was."

Speaking Spanish, which was translated by one of her friends, Tejeda said Berry was nervous and crying. She was dressed in pajamas and old sandals.

At first Tejeda said she didn't want to believe who the young woman was. "You're not Amanda Berry," she insisted. "Amanda Berry is dead."

But when Berry told her she'd been kidnapped and held captive, Tejeda said she gave her the telephone to call police, who arrived within minutes and then took the other women from the house.

On a recorded 911 call Monday, Berry declared: "I'm Amanda Berry. I've been on the news for the last 10 years."

She said she had been taken by someone and begged for police officers to come to the home on Cleveland's west side before the man returned.

Ramsey also called 911 to alert authorities to the situation.

Berry is now 27, according to the National Center for Missing & Exploited Children. DeJesus is now 24 years old. They were found just a few miles from where they had vanished.

Officials said Ariel Castro had drawn little attention from authorities prior to Monday.

In 2000, before the women vanished, Ariel Castro reported a fight in the street, but no arrests were made, Public Safety Director Flask said.

In January 2004, police went to the home where the women were apparently held and knocked on the door, according to Deputy Police Chief Ed Tomba.

The police did not approach Castro's home to ask about missing girls, however. Castro was a school bus driver, and had left a child on his bus when he returned it to the depot. Officials wanted to know why.

"He was interviewed extensively for this complaint," Tomba said. "He was a bus driver who left a kid on a bus, went to a lunch break and found the young man."

When pressed at a news conference Tuesday as to why little came of the incident, Tomba said there had never been a hint of suspicion about Castro until after the women were freed. There were no other complaints against him or the house, no city code violations.

"Our policies have been revamped over the few years," Tomba said. "I can tell you as part of this division for 28 years the amount of effort (around these missing persons cases), I've never seen it before. Every lead was followed up. We had vigils, we dug up backyards."

However, two neighbors said they were alarmed enough by what they saw at the house to call police on two occasions.

Elsie Cintron, who lives three houses away, said her daughter once saw a naked woman crawling on her hands and knees in the backyard several years ago and called police. "But they didn't take it seriously," she said.

Another neighbor, Israel Lugo, said he heard pounding on some of the doors of Castro's house, which had plastic bags on the windows, in November 2011. Lugo said officers knocked on the front door, but no one answered. "They walked to side of the house and then left," he said.

Neighbors also said they would see Castro sometimes walking a little girl to a neighborhood playground. And Cintron said she once saw a little girl looking out of the attic window of the house.

Four years ago, in another part of town, Cleveland's police force was heavily criticized following the discovery of 11 bodies in the home and backyard of Anthony Sowell, who was convicted and sentenced to death.

The victims' families in the Sowell case accused police of failing to properly investigate the disappearances because most of the women were addicted to drugs and lived in an impoverished neighborhood. For months, the stench of death hung over the house, but it was blamed on a sausage factory next door.

In the wake of public outrage over the killings, a panel formed by the mayor recommended an overhaul of the city's handling of missing-person and sex crime investigations.

Ramsey, the neighbor who helped rescue Berry, said he'd barbecued with the home's owner and never suspected anything was amiss.

"There was nothing exciting about him -- well, until today," he said.

Neighbor Juan Perez told NBC's "Today" show that he rarely saw Castro or anyone else at the house.

"I thought the home was vacant. I thought he probably had another property and he would just come and check and see if everything is OK." Perez said. "I didn't even know anybody lived there."

Attempts to reach Ariel Castro in jail were unsuccessful Monday. There was no public phone listing for the home, which was being searched by dozens of police officers and sheriff's deputies.

The rescue of the three women -- with all three apparently in good health -- is an unusual conclusion to child kidnapping cases.

Elizabeth Smart, who was just 14 when she was snatched from her bed in the middle of the night and held for nine months before being found by police on a traffic stop, said in an interview with CBS News last year that family and friends should never give up hope.

"You never know when that break in the case might come," said Smart. "What if everyone gave up on me, where would I be? Would I be alive? I don't know."

A sign outside the home of DeJesus' parents read "Welcome Home Gina."

Her aunt Sandra Ruiz told reporters that she was able to see all three. She asked that the family be given space.

The women's loved ones said they hadn't given up hope of seeing them again.

A childhood friend of DeJesus, Kayla Rogers, said she couldn't wait to hug her.

"I've been praying, never forgot about her, ever," Rogers told The Plain Dealer newspaper.

Berry's cousin Tasheena Mitchell told the newspaper she couldn't wait to have Berry in her arms.

"I'm going to hold her, and I'm going to squeeze her and I probably won't let her go," she said.

Berry's mother, Louwana Miller, who had been hospitalized for months with pancreatitis and other ailments, died in March 2006. She had spent the previous three years looking for her daughter, whose disappearance took a toll as her health steadily deteriorated, family and friends said.

For years, Berry's mother kept her room exactly as it was, said Tina Miller, a cousin. When magazines addressed to Berry arrived, they were piled in the room alongside presents for birthdays and Christmases she missed.

Investigators celebrated the news almost as much as the families.

"For Amanda's family, for Gina's family, for Michelle's family, prayers have finally been answered. The nightmare is over," said Stephen Anthony, head of the FBI office in Cleveland. "These three young ladies have provided us with the ultimate definition of survival and perseverance. The healing can now begin."

He added: "Words can't describe the emotions being felt by all. Yes, law enforcement professionals do cry."

The disappearances of Berry and DeJesus never left the minds of police. Investigators twice dug up backyards looking for Berry and continued to receive tips about the two every few months, even in recent years. But few leads ever came in about Knight, who was the first of the three to disappear, in August 2002.