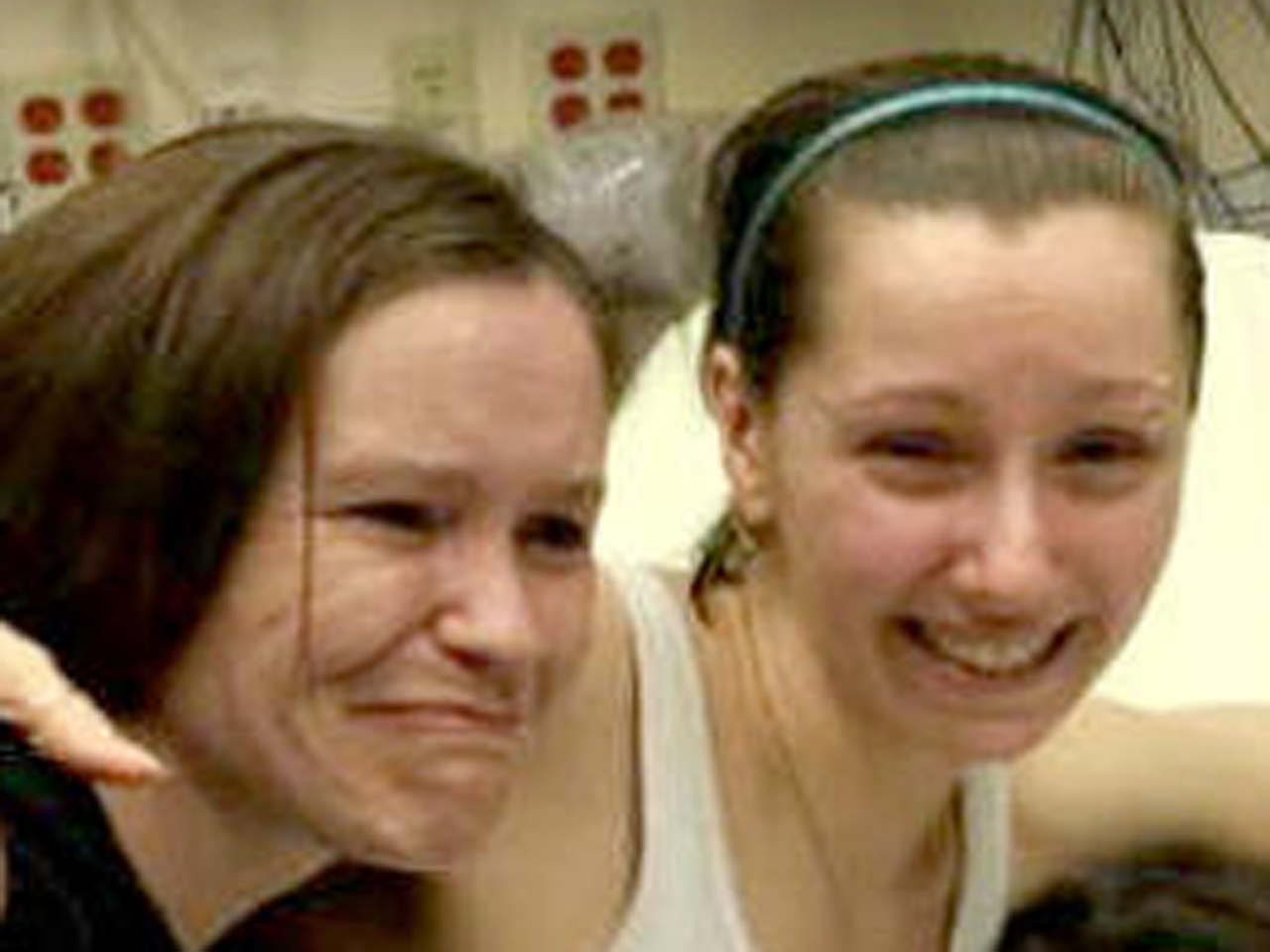 CLEVELAND Three women who went missing separately about a decade ago, when they were in their teens, were found alive Monday in a residential area just south of downtown, and three men -- all brothers -- were arrested.

One of the women told a 911 dispatcher the person who had taken her was gone, and she pleaded for police officers to come and get her, saying, "I'm free now."

Cheering crowds gathered Monday night on the street near the home where police said Amanda Berry, Gina DeJesus and Michelle Knight were found earlier in the day.

Police didn't immediately provide any details of how the women were found but said they appeared to be in good health and had been taken to a hospital to be reunited with relatives and to be evaluated. CBS affiliate WOIO reports Berry was found with a 6-year-old girl, her daughter.

On a recorded 911 call Monday, Berry declared, "I'm Amanda Berry. I've been on the news for the last 10 years."

She said she had been taken by someone and begged for police officers to arrive at the home on Cleveland's west side before he returned.

WOIO reports one of the brothers who was arrested is a 52-year-old Cleveland City Schools bus driver. Officials said charges would come within the next 36 hours.

Berry disappeared at age 16 on April 21, 2003, when she called her sister to say she was getting a ride home from her job at a Burger King. DeJesus went missing at age 14 on her way home from school about a year later. They were found just a few miles from where they had gone missing.

According to the Plain Dealer newspaper, Knight was 18 when she became the first of the three to go missing, on Aug. 23, 2002.

Dozens of police officers and sheriff's deputies remained at the scene late Monday awaiting a warrant to search the building where the women and the child were found.

Loved ones said they hadn't given up hope of seeing the women again. Among them was Kayla Rogers, a childhood friend of DeJesus.

"I've been praying, never forgot about her, ever," Rogers told The Plain Dealer newspaper. "This is amazing. This is a celebration. I'm so happy. I just want to see her walk out of those doors so I can hug her."

Berry's cousin Tasheena Mitchell told the newspaper she couldn't wait to have Berry in her arms.

"I'm going to hold her, and I'm going to squeeze her and I probably won't let her go," she said.

Berry's mother, Louwana Miller, who had been hospitalized for months with pancreatitis and other ailments, died in March 2006. She had spent the previous three years looking for her daughter, whose disappearance took a toll as her health steadily deteriorated, family and friends said.

"We have many unanswered questions regarding this case, and the investigation will be ongoing," he said in a statement.

"We're assessing their needs, and the appropriate specialists are evaluating them as well," he said at a news conference, which concluded with a round of applause from a large gathering of area residents.

In January, a prison inmate was sentenced to 4 1/2 years after admitting he provided a false burial tip in the disappearance of Berry, who had last been seen the day before her 17th birthday. A judge in Cleveland sentenced Robert Wolford on his guilty plea to obstruction of justice, making a false report and making a false alarm.

Last summer, Wolford tipped authorities to look for Berry's remains in a Cleveland lot. He was taken to the location, which was dug up with backhoes.

Two men arrested for questioning in the disappearance of DeJesus in 2004 were released from the city jail in 2006 after officers did not find her body during a search of the men's house.

One of the men was transferred to the Cuyahoga County Jail on unrelated charges, while the other was allowed to go free, police said.

In September 2006, police acting on a tip tore up the concrete floor of the garage and used a cadaver dog to search unsuccessfully for DeJesus' body. Investigators confiscated 19 pieces of evidence during their search but declined to comment on the significance of the items then.

No Amber Alert was issued the day DeJesus failed to return home from school in April 2004 because no one witnessed her abduction. The lack of an Amber Alert angered her father, Felix DeJesus, who said in 2006 he believed the public will listen even if the alerts become routine.

"The Amber Alert should work for any missing child," Felix DeJesus said then. "It doesn't have to be an abduction. Whether it's an abduction or a runaway, a child needs to be found. We need to change this law."

Cleveland police said then that the alerts must be reserved for cases in which danger is imminent and the public can be of help in locating the suspect and child.