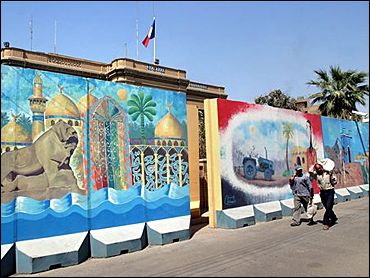 French Foreign Minister Michel Barnier appealed Monday for the release of two French journalists abducted in Baghdad, saying he was in the Middle East to explain that France respected Islam and not ruling out a trip to the Iraqi capital himself.

The kidnapping was condemned by religious and political leaders in the region.

Barnier arrived in Egypt before dawn Monday after French President Jacques Chirac vowed to spare no effort to secure freedom for the reporters, believed held by a group that has denounced a French law banning Muslim school girls from wearing head scarves. French government spokesman Jean-Francois Cope told a French television station Monday that France would press ahead with the law, which goes into effect when school resumes this week.

Barnier said France is a country that respects all religions and human rights and noted that Muslim leaders in France also had called for the journalists' release.

"I call for their release ... for all these reasons, and especially because the respect for human life is sacred," Barnier told reporters at the French Embassy in Cairo, reading a prepared statement.

The two reporters — Christian Chesnot and Georges Malbrunot — were in Iraq "to explain to the world, to bear witness to the difficult conditions of the Iraqi people," he said.

Barnier said French government officials were going to Baghdad to help the embassy there handle the situation. Asked whether he would go, he said: "Nothing is excluded."

The French government had been trying to determine what had happened to Chesnot and Malbrunot and then to secure their release since they went missing 10 days ago, Barnier said.

The government worked quietly at first because "discretion is a guarantee of safety," he said, but decided to pursue a more public strategy following Saturday's demand from the kidnappers that France scrap its head scarf ban.

Chesnot works for Radio France-Internationale and Radio France and Malbrunot for RTL radio and the dailies Le Figaro and Ouest-France.

Later Monday, Barnier with Amr Moussa, secretary-general of the Arab League. Afterward, Moussa issued his own call for the reporters' release, saying the kidnapping could hurt "the image of Arabs in the West."

Jordanian government spokeswoman Asma Khader joined the Arab chorus condemning the kidnapping, saying at her regular press briefing in the Jordanian capital that it was "against religion and the law."

Barnier said he would meet with religious as well as political leaders in the Middle East, but would not provide details.

Religious figures in the region already have denounced the kidnapping. Sheik Maher Hammoud, a hard-line Sunni Muslim cleric in the southern Lebanese port city of Sidon, issued a statement Sunday saying: "This is not the way to solve problems. Such actions will only increase the enemies of the (head scarf) in France."

In Jordan, the fundamentalist Islamic Action Front also said the kidnapping was an inappropriate way to protest the head scarf ban, and noted France had opposed the U.S.-led invasion of Iraq.

Militants calling themselves the Islamic Army in Iraq demanded France revoke its law banning Islamic head scarves in public schools. They described the law as "an aggression on the Islamic religion and personal freedoms," according to the Arab TV station Al-Jazeera, which showed parts of a tape received Saturday from the group.

The head scarf law forbids public school students from wearing "conspicuous" religious apparel. Jewish skullcaps and large Christian crosses will also be banned, but the true target of the law are head scarves — seen by authorities as a sign of rising Muslim fundamentalism in France.

Barnier did not address the militants' demand in his statement, but in briefly responding to questions afterward, said "this ultimatum is incomprehensible, given the reality of French society."

Barnier described France as "a land of tolerance — that is the truth of my country," and said he was in the Middle East to explain "this truth."

A militant group with a similar name to the one holding the French journalists is believed to be responsible for the death last week of Italian freelance journalist Enzo Baldoni. Prior to his murder, the group had demanded that Italy withdraw its troops from Iraq.