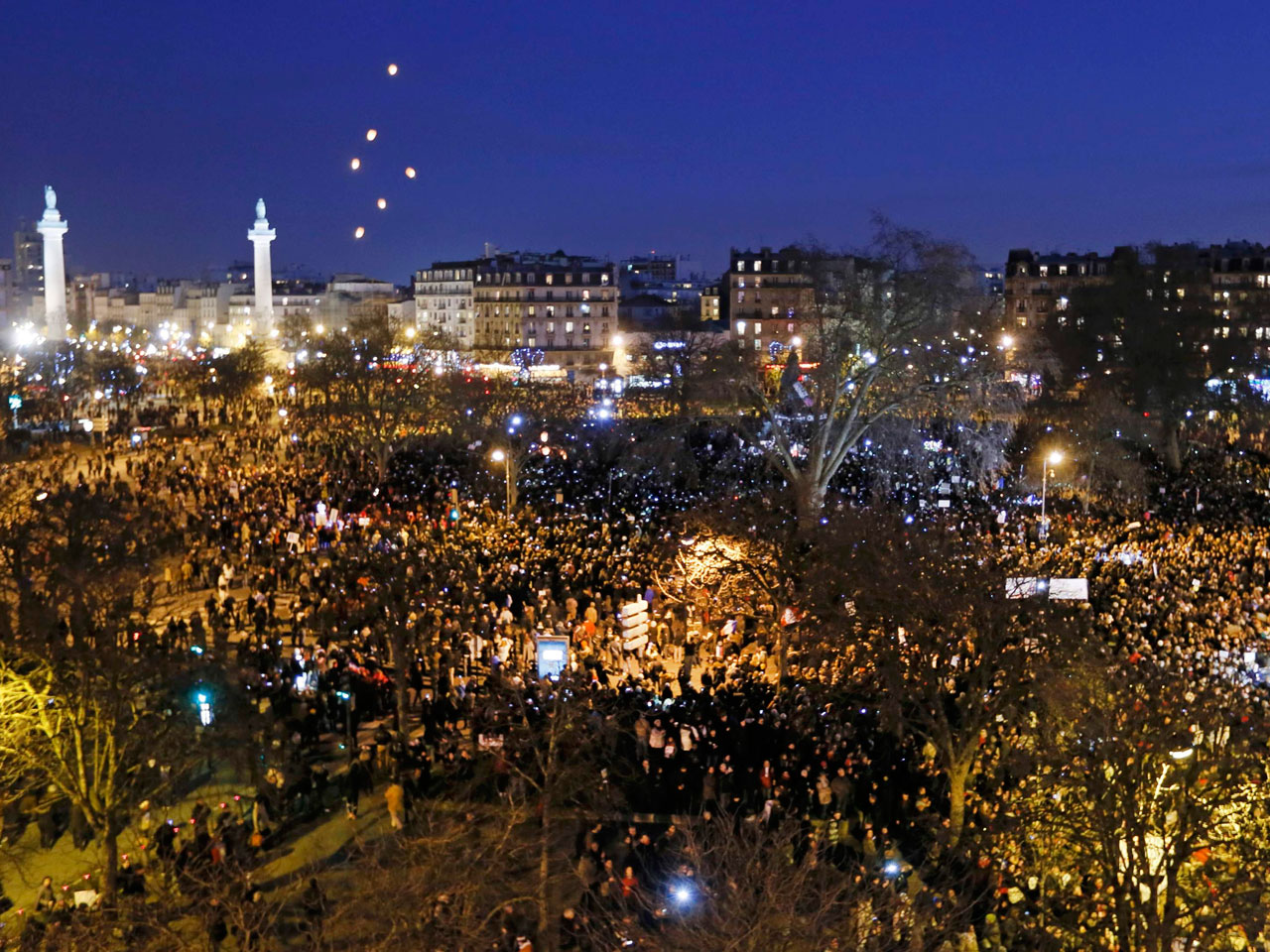 PARIS - Masses of people joined with world leaders to fill Paris streets Sunday in a rally for unity that officials said was the largest demonstration in French history. Hundreds of thousands more marched in cities around the country and the world to repudiate a three-day terror spree around the French capital that killed 17 people and left the three gunmen dead.

Millions of people streamed through the streets behind them to mourn the victims of deadly attacks on a satirical newspaper, a kosher supermarket and police officers - violence that tore deep into France's sense of wellbeing in a way some compared to Sept. 11 in the United States.

"Our entire country will rise up toward something better," Hollande said.

Parisian police officials told CBS News there were "no incidents" reported after the massive rally as of 10 p.m. local time. They added that it was the first time in recent memory there was such a large rally in the French capital with absolutely no incidents.

Details of the attacks continued to emerge, with new video showing one of the gunmen pledging allegiance to the Islamic State of Iraq and Syria, and detailing how the attacks were going to unfold. That gunman, Amedy Coulibaly, was also linked to a new shooting, two days after he and the brothers behind a massacre at satirical newspaper Charlie Hebdo were killed in nearly simultaneous police raids.

The attacks tested France's proud commitment to its liberties - liberties that authorities may now curtail to ensure greater security. Marchers recognized this as a watershed moment.

Illustrating his point, people cheered police vans as they wove through the crowds Sunday - a rare sight at the many demonstrations that Parisians have staged throughout their rebellious history, when protesters and police are often at odds.

Many shed the aloof attitude Parisians are famous for, helping strangers with directions, cheering and crying together. Sad and angry but fiercely defending their freedom of expression, the marchers mourned the dead and brandished pens and flags from around the world.

Giant rallies were held throughout France and major cities around the world, including London, Madrid and New York - all attacked by al Qaeda-linked extremists - as well as Cairo, Sydney, Stockholm, Tokyo and elsewhere.

In Paris, the Interior Ministry said, "the size of this unprecedented demonstration makes it impossible to provide a specific count," noting that the crowds were too big to fit on the official march route and spread out into other streets.

Later, the ministry said 3.7 million marched throughout France, including roughly between 1.2 and 1.6 million in Paris, but said a precise account is impossible given the enormity of the turnout.

French news media estimated up to 3 million people took part in the Paris march - more than the numbers who took to Paris streets when the Allies liberated the city from the Nazis in World War II.

"I hope that at the end of the day everyone is united. Everyone - Muslims, Jews, Christians, Buddhists," said marcher Zakaria Moumni. "We are humans first of all, and nobody deserves to be murdered like that. Nobody."

On Paris' Republic Square, deafening applause rang out as the world leaders walked past, amid tight security and an atmosphere of togetherness amid adversity. Families of the victims, holding each other for support, marched in the front along with the leaders and with journalists working for the Charlie Hebdo newspaper. Several wept openly.

"I Am Charlie," read legions of posters and banners. Many waved editorial cartoons, the French tricolor and other national flags.

The leaders marched down Voltaire Boulevard - named after the Enlightenment-era figure who symbolizes France's attachment to freedom of expression. One marcher bore a banner with Voltaire's famed pledge: "I do not agree with what you say, but I will fight to the death to defend your right to say it."

The French president joined Netanyahu in a visit to a synagogue Sunday night as French authorities sought to reassure the Jewish population - Europe's largest - that it is safe to stay in France.

The targeting of Jews in the grocery store attack has touched a nerve for many in the country's Jewish community, which prior to the attack had expressed concern over a rising tide of anti-semitism following the Israel-Gaza war. Israeli premier Benjamin Netanyahu had asked French officials to step up security around Jewish sites following the recent attacks.

Before Sunday's rally, Netanyahu said in a statement that "any Jew who wants to immigrate to Israel will be received here with open arms."

Seven thousand of France's half-million Jews emigrated to Israel last year amid concerns for their safety and the economy.

However, some have pointed to the story of a Muslim immigrant who worked in the kosher grocery store that was attacked as a sign of hope.

Lassana Bathily was in the store's underground stockroom when gunman Amedy Coulibaly burst in upstairs, according to accounts given to French media and to a friend of Bathily's who spoke to The Associated Press. Bathily turned off the stockroom's freezer and hid a group of frightened shoppers inside before sneaking out through a fire escape to speak to police. Initially confused for the attacker, he was forced to the ground and handcuffed.

Once police realized their mistake, he provided them with the key they needed to open the supermarket's metal blinds and mount their assault.

As night fell on the unusually unified city, some lit candles.

"It's important to be here for freedom for tolerance and for all the victims. It's sad we had to get to this point for people to react against intolerance, racism and fascism," said Caroline Van Ruymbeke, 32.

At an international conference in India, U.S. Secretary of State John Kerry said the world stood with the people of France "not just in anger and in outrage, but in solidarity and commitment to the cause of confronting extremism and in the cause that extremists fear so much and that has always united our countries: freedom."

The three days of terror began Wednesday when brothers Said and Cherif Kouachi stormed the newsroom of Charlie Hebdo, killing 12 people including two police officers. Al Qaeda's branch in Yemen said it directed the attack to avenge the honor of the Prophet Muhammad, a frequent target of the weekly's satire. Charlie Hebdo assailed Christianity, Judaism as well as officialdom of all stripes with its brand of sometimes crude satire.

On Thursday, police said Coulibaly killed a policewoman and the next day he seized hostages at a kosher store in Paris while the Kouachi brothers were in a standoff with police at a printing plant near Charles de Gaulle airport. It all ended at dusk Friday with raids that left all three gunmen dead. Four hostages at the market were also killed.

Five people held in connection with the attacks were freed late Saturday, leaving no one in custody, according to the Paris prosecutor's office. Coulibaly's widow, last seen near the Turkish-Syrian border, is still being sought.

France remains on high alert while investigators determine whether the attackers were part of a larger extremist network. More than 5,500 police and soldiers were deployed on Sunday across France, guarding marches, synagogues, mosques, schools and other sites.

"The terrorists want two things: they want to scare us and they want to divide us," French Foreign Minister Laurent Fabius told TV channel iTele. "We must do the opposite: We must stand up and we must stay united."