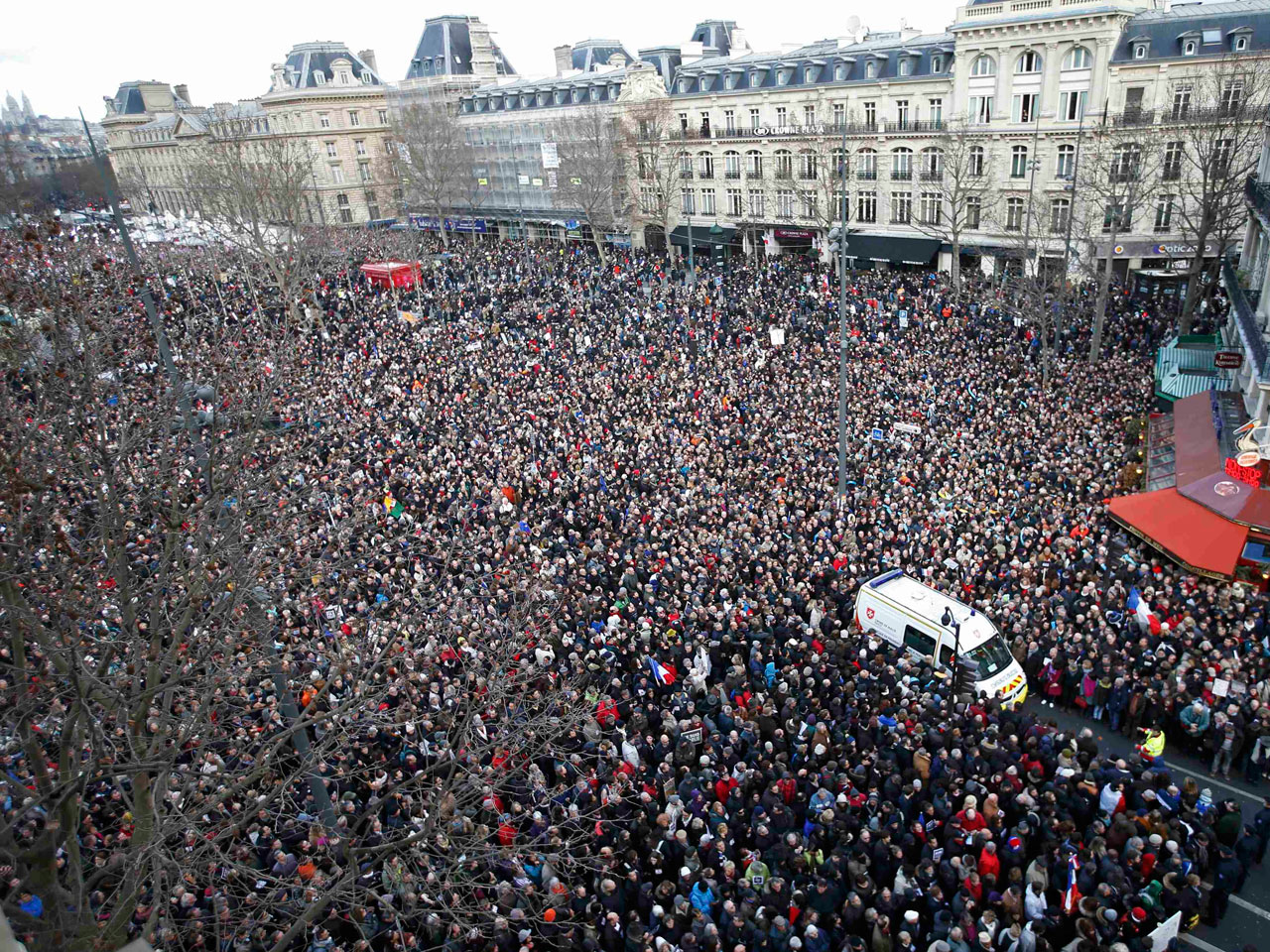 PARIS - More than 40 world leaders, their arms linked, marched through Paris Sunday to rally for unity and freedom of expression to honor the 17 victims of three days of terror.

The leaders were heading a demonstration of at least tens of thousands of people who converged on the capital after three gunmen attacked a newspaper office, kosher supermarket and police. Deafening applause rang out over the square as the leaders walked past, amid tight security and an atmosphere of togetherness amid adversity.

Although official estimates haven't been released yet, some put the number of people in attendance at the Paris rally at more than one million.

The aftermath of the attacks remained raw, with video emerging of one of the gunmen killed during police raids pledging allegiance to the Islamic State of Iraq and Syria and detailing how the attacks were going to unfold. Also, a new shooting was linked to that gunman, Amedy Coulibaly, who was killed Friday along with the brothers behind a massacre at satirical newspaper Charlie Hebdo in nearly simultaneous raids by security forces.

"Today, Paris is the capital of the world," said French President Francois Hollande. "Our entire country will rise up toward something better."

Unity against extremism is the overriding message for Sunday's rally. Among the expected attendees are the Israeli prime minister and the Palestinian president; the Ukrainian president and Russian foreign minister; and the leaders of Britain, Germany, NATO, the Arab League and African nations.

Rallies were also planned in London, Madrid and New York - all attacked by al Qaeda-linked extremists - as well as Cairo, Sydney, Stockholm, Tokyo and elsewhere.

"We are all Charlie, we are all police, we are all Jews of France," Prime Minister Manuel Valls declared on Saturday, referring to the victims of the attacks that included employees at Charlie Hebdo, shoppers at a kosher grocery and three police officers.

On Thursday, police said Coulibaly killed a policewoman on the outskirts of Paris and on Friday, the attackers converged.

While the Kouachi brothers holed up in a printing plant near Charles de Gaulle airport, Coulibaly seized hostages inside a kosher market. It all ended at dusk Friday with near-simultaneous raids at the printing plant and the market that left all three gunmen dead. Four hostages at the market were also killed.

Five people who were held in connection with the attacks were freed late Saturday, leaving no one in custody, according to the Paris prosecutor's office. The widow of the man who attacked the kosher market is still being sought and was last traced near the Turkey-Syrian border.

Early Sunday, police in Germany detained two men suspected of an arson attack against a newspaper that republished the Charlie Hebdo cartoons. No one was injured in that attack.

"The terrorists want two things: they want to scare us and they want to divide us. We must do the opposite. We must stand up and we must stay united," French Foreign Minister Laurent Fabius told French TV channel iTele on Sunday.

It was France's deadliest terrorist attack in decades, and the country remains on high alert while investigators determine whether the attackers were part of a larger extremist network. More than 5,500 police and soldiers were being deployed on Sunday across France, about half of them to protect the march. The others were guarding synagogues, mosques, schools and other sites around France.

"I hope that we will again be able to say we are happy to be Jews in France," said Haim Korsia, the chief rabbi in France, who planned to attend the rally.

The targeting of Jews in the grocery store attack has touched a nerve for many in the country's Jewish community, which prior to the attack had expressed concern over a tide of anti-semitism following the Israel-Gaza war. Israeli premier Benjamin Netanyahu had asked French officials to step up security around Jewish sites following the recent attacks.

Before Sunday's rally, Netanyahu said in a statement that "any Jew who wants to immigrate to Israel will be received here with open arms."

He later announced the bodies of French Jews killed in the Paris grocery store will be buried in Israel.

At an international conference in India, U.S. Secretary of State John Kerry said the world stood with the people of France "not just in anger and in outrage, but in solidarity and commitment to the cause of confronting extremism and in the cause that extremists fear so much and that has always united our countries: freedom."

Posthumous video emerged Sunday of Coulibaly, who prosecutors said was newly linked by ballistics tests to a third shooting - the Wednesday attack on a jogger in a Paris suburb that left the 32-year-old man gravely injured. In the video, Coulibaly speaks fluent French and broken Arabic, pledging allegiance to ISIS and detailing the terror operation he said was about to unfold.

The Kouachi brothers claimed the attacks were planned and financed by al Qaeda in Yemen.