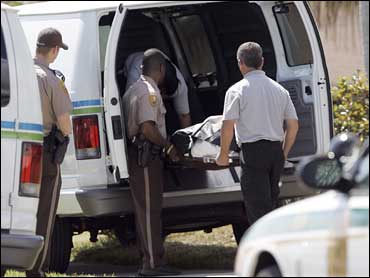 A 53-year-old music teacher fatally shot his wife and two daughters Wednesday before killing himself, while his 16-year-old son who survived the attack managed to call police as he escaped uninjured from the Miami home, authorities said.

Police haven't released names, but neighbors identified the family members as Pablo Josue Amador; his wife, Maria; their youngest daughters, Priscila and Rosa; and the escaped son, Javier. They said the couple also had a 19-year-old daughter who attends college.

CBS station WFOR in Miami reports that county records show the home is owned by Pablo and Maria Amador, 47, and that Maria worked at The Miami Project To Cure Paralysis, a research center dedicated to studies in the field of paralysis and spinal cord injury.

Sarait Betancourt, a 44-year-old school bus driver who lives near the family, said Amador is a Cuban immigrant who gave piano lessons at a guitar shop and at his home. Betancourt's two sons, ages 9 and 10, had been taking piano lessons from him once a week since 2006.

"He was a marvelous person and a tremendous professor," she said. "People would enter the house, and you just breathed peace."

Betancourt said all four children excelled at piano and performed together at church and home as Los Galileos. Authorities have not confirmed that there is a fourth sibling.

Officers went to the home in southern Miami-Dade County just before 6 a.m. to investigate reports of shots being fired. Police found a gun but didn't say what type or how many shots were believed fired.

Neighbors on the quiet street of modest single-family homes said there was nothing that particularly stood out about the family. Some remembered the father waving hello. Others remembered children playing in the family's in-ground pool and music emanating from the home.

Soraya Peer said she has lived next to the family for five years and had seen "nothing negative come out of that home before."

Christina Ruiz, a 23-year-old social work student who lives next to the family, described Amador as a "regular dad" who helped her grandmother jump-start her car several times but who was known to complain when he was bothered by noise or work being done on her house.

Local Video from CBS4 in Miami