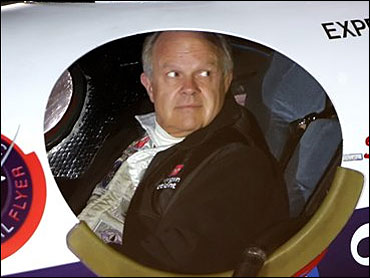 Adventurer Steve Fossett shot down a three-mile runway in an experimental aircraft Wednesday and took off on an attempt to break a 20-year-old flight distance record.

"The roll was longer than we anticipated but that's why he wanted to use a 15,000-foot runway," Ball said.

Fossett's goal is a nearly 27,000-mile trip, once around the world and then across the Atlantic again, with a landing outside London.

Flying at an altitude of 45,000 feet, the 80-hour journey could take him from the Kennedy Space Center eastward around the world once. Then somewhere over Georgia he will decide whether he has enough fuel to cross the Atlantic a second time and head for a landing outside London.

"I'm not confident of success because of what I'm trying to do," Fossett said Monday at a news conference accompanied by Richard Branson, whose company, Virgin Atlantic, is sponsoring the flight. "We calculate that I will be able to complete the flight and have a success, but it will be very close."

If successful, the 3½-day trip would break the previous airplane record of 24,987 miles set in 1986 by the Voyager aircraft piloted by Dick Rutan and Jeanna Yeager, as well as the balloon record of 25,361 miles set by the Breitling Orbiter 3 in 1999.

"Mountain climbing was my original sport ... and I've never tired from the satisfaction of getting to the top of a mountain," Fossett said in a recent interview.

A fuel leak Tuesday in Fossett's aircraft delayed his takeoff, but after a quick fix, the plane was ready to go again.

Shortly before 7:30 a.m. Wednesday, it became the first experimental airplane built by the private sector to take off from Cape Canaveral.

Eating during the flight will be easy, Fossett said, but not sleeping.

His plane is equipped with a parachute pack holding a one-man raft and a satellite rescue beacon, just in case.

Fossett already holds the record for flying solo around the globe in a balloon and for being the first person to circle the globe solo in a plane without stopping or refueling. That flight last year lasted 67 hours and also was hampered by a fuel leak.

He is using the same plane, the Virgin Atlantic Global Flyer, which has a 114-foot wing span, in his latest quest. Both ventures were financed by Virgin Atlantic Airways founder Richard Branson.

"This plane is hoping to fly further than any plane, any balloon, anything that's ever flown before," he said Monday.